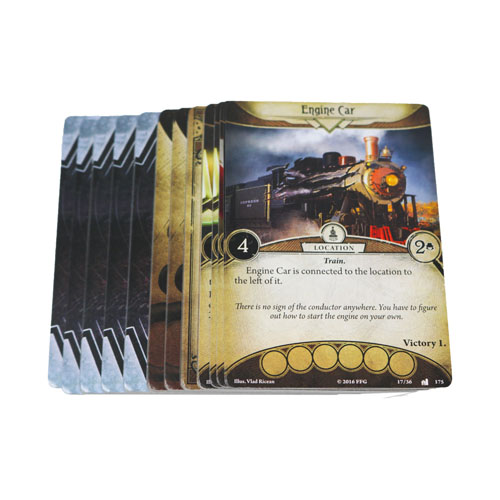 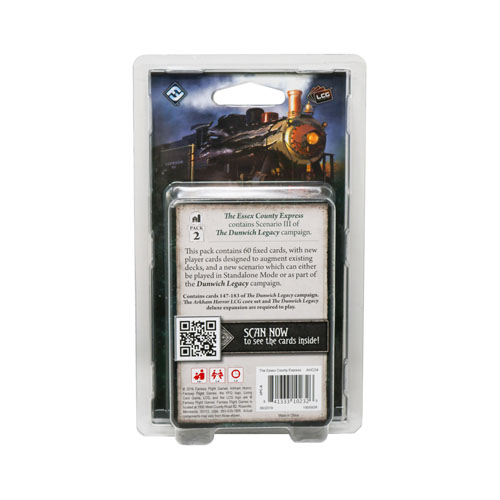 Arkham Horror: The Card Game is a cooperative game for up to two players (or four, with two core sets). Set within the fictional world of H P Lovecraft’s Cthulhu Mythos, players will each take on the role of an investigator. Each investigator is unique, with their own set of skills, strengths and weaknesses, represented a deck of cards. The game is played by completing a numbe…
Read More
Category Board Games Tags Arkham Horror, Arkham Horror LCG, Best Sellers, Fantasy Flight Games, Living Card Game SKU ZBG-FFGAHC04 Availability 5+ in stock
Share
Share this
91%

In The Essex County Express, the Dunwich Cycle of Arkham Horror LCG takes a hellish ghost train. It goes across the New England countryside in a horrific race against time. The adrenaline is turned up to eleven after the game of cat and mouse in The Miskatonic Museum. Now the investigators find themselves caught in a train full of Lovecraftian nasties. They must make their way to whatever lurks in the engine car. Before they are sucked into the void of a rift in time and space.

In terms of gameplay, The Essex County Express is one of my favourite adventures in the LCG. It works brilliantly as a stand-alone adventure (although you need the base game and the Dunwich Legacy Deluxe expansion). The key difference between this and other chapters in the story is the relentless need to push forwards through the carriages. It’s an all-action instalment. Variable set up causes every step brings fresh surprises and challenges. This means even familiarity with the scenario does not ensure success.

Card wise, the Shrivelling spell gets an upgrade. It boosts its power and chance of success if you are playing with a Mystic. Guardians who are going for an attacking set up will also be pleased with the Bandolier, giving them a spare hand to carry an extra weapon. Survivors and Rogues may feel a little short-changed, however. The lure card for the former is very useful in other missions but feels pretty useless here when the direction of travel is a straight line.

Without giving away spoilers, there are some new big bads here that will take a lot of firepower to take down and will block your progress. Hey, there’s not much room for manoeuvre in a train carriage. There’s barely space to swing a stray cat.

If a new player wants a taste of Arkham Horror LCG, I often use this adventure as an entry point. I think it has a little bit of everything you need to learn to play and showcases the game at its best. It’s a scare ride I can’t resist returning to again and again

Easily one of the most thrilling Arkham Horror LCG missions, The Essex County Express rattles along at a tremendous pace. The linear structure of the locations creates a tight space and brain jangling push through carriage after carriage of indescribable unpleasantness. Win or lose it will leave you exhilarated and breathless.