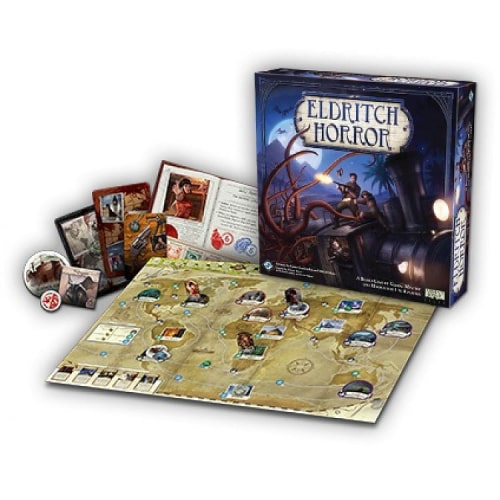 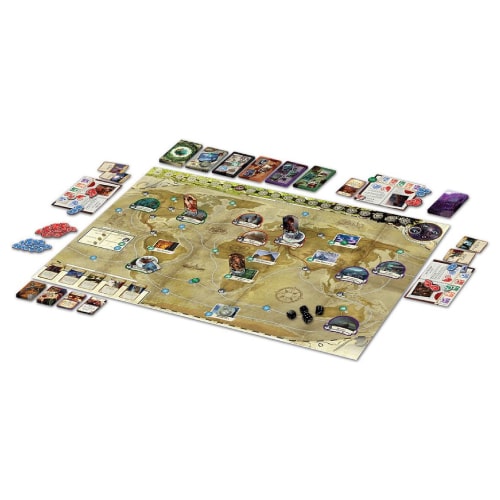 Taking you across the globe, battling the dark forces of H.P. Lovecraft’s fiction, Eldritch Horror plunges 1-8 players into a harrowing campaign to prevent the Ancient Ones from awakening and devastating the world as we know it. Fantasy Flight Games will take you on a conquest in which you will encounter a slew of ungodly horrors and accrue injuries to your body and mind as you at…
Read More
Category Board Games Tags BGG Top 100, Corey Konieczka, Dice Tower, Eldritch Horror, Fantasy Flight Games, Nikki Valens, Zatu Gold Award SKU ZBG-FFGEH01 Availability 3+ in stock
Share
Share this
85%

Taking you across the globe, battling the dark forces of H.P. Lovecraft’s fiction, Eldritch Horror plunges 1-8 players into a harrowing campaign to prevent the Ancient Ones from awakening and devastating the world as we know it. Fantasy Flight Games will take you on a conquest in which you will encounter a slew of ungodly horrors and accrue injuries to your body and mind as you attempt to repel them. In this co-operative experience, you assume control of one of 12 playable investigators to solve three mysteries unique to each of the four Ancient Ones. Each of these otherworldly beings considerably alters the obstacles you’ll face, from the insanity-provoking sea-entities of Cthulhu, to the spell-orientated gatekeeper, Yog-Sothoth. Regardless of the opponent you select, Eldritch Horror promises a challenging experience. In this box, players will have the choice of 12 different investigators, with differing stats, abilities and starting ‘assets’ which will drastically alter your playstyle. These traits can be altered over the course of the game, for better or worse. Of the 40 assets you have available, you can utilise firearms, allies and various supportive services. You can also risk your psyche to control artefacts and spells of the mythos. All of these components printed on high quality quality and emblazoned with gorgeous artwork. The gameplay itself involves moving across a map of the world, gathering clues, slaying monsters and engaging in otherworldly encounters. These are primarily performed using dice rolls, which can be augmented using the aforementioned character stats and equipment. The game is straightforward to teach, but has enough depth to stay interesting after numerous plays and remains challenging to even the most experienced players. A more in-depth overview can be found in our review, which fondly scores Eldritch Horror 85%. If you join the many others in loving this game, there are several expansions available to enhance your experience, which we would certainly encourage you to look into. To begin with, we’d suggest the Forsaken Lore expansion, which is a well-rounded little box that brings you a bit more of everything. Player Count: 1-8 Time: 120-240 Minutes Age: 14+

A cosmic being of unimaginable power and evil stirs from its ancient slumber, threatening to cross the void between worlds and feast on humanity. Cultists around the world perform arcane rituals to hasten its approach, and bring about the end of days. You are all that stands between the Ancient One and global annihilation, will you step up and save the planet?!

Eldritch Horror is a co-operative game set in the roaring '20s, inspired by the Cthulhu mythos of H.P. Lovecraft, where one to eight players control investigators, aiming to banish an Ancient One by travelling the globe, battling monsters, closing gates to other dimensions, and uncovering clues to help solve mysteries.

So, how do we save the world?

Each Ancient One (there are four in the core game, including Cthulhu itself), comes with its own set of mysteries, three of which must be solved in order to stop it from entering our dimension. Mysteries range from defeating epic monsters, and sealing dimensional gates, to gathering clues, or travelling the globe to investigate eldritch goings on.

These mysteries, along with other Ancient One specific cards, give a unique flavour to each game.

There are 12 investigators to choose from in the core Eldritch Horror box, and fans of other Arkham Horror Files games will recognise some familiar faces. Investigators range from grey bearded astronomer and professor Norman Withers, to Jacqueline Fine the troubled psychic, Lily Chen the disciplined martial artist, to Silas Marsh the bare chested salty sea dog.

Each investigator has their own skill values (in Lore, Influence, Observation, Strength and Will), starting possessions and unique abilities, which means some are better suited to finding clues than dispatching monsters, so choose wisely.

What happens in a game round?

Each game round consists of three phases, the Action Phase, Encounter Phase, and the (dreaded) Mythos Phase:

Oh, did I forget to mention that you will be doing all of this against the clock? If the three mysteries are not solved before the Doom Track reaches zero, the Ancient One awakens, and things get really crazy! Usually this involves adding a final (and very tough) mystery that needs to be solved in addition to the standard three in order to win - as you might have guessed, there are lots of ways to lose this game, and only one way to win!

If you think none of this sounds easy, you'd be absolutely right, but despite being complex and brutal, this game can be enormously rewarding, surprisingly easy to pick up, and above all fun!

Eldritch Horror is obviously physically big (stacks of cards and tokens, and a board of epic proportions), but during play it feels even bigger than the sum of all those parts. There is often a sense that the game is playing you, serving up events that, on the whole, jigsaw together to weave a great story. Yes, there is the occasional time when an event can be a bit jarring (especially at higher player counts when there are generally more events happening), but these are soon forgotten.

There is a relentless feeling of dread all through the game, with real tension as you hesitate to turn over a Mythos Card, or have to flip a condition card (such as poisoned, internal injury, or the Dark Pact) to see what awful fate awaits you.

Of course, the merciless nature of the game means that it won't suit everyone, especially if you don't like losing, time and time again, because you will, over and over. But on the flipside, that does make this an incredibly satisfying game to win - when you are one clue away from solving the last mystery, with the Doom Track just hovering over zero, with next to no health or sanity left, and you manage to pull off a victory, you'll feel a real sense of achievement (and relief!).

Whilst the feeling of scale that comes from the sheer size of the game is great, it does have its drawbacks:

Well you're in luck! There are so many expansions for Eldritch Horror, new and old, that add layers of everything to the game, more boards, investigators, items, spells, and importantly more Ancient Ones.

A good place to start is the Forsaken Lore expansion, a small box expansion (so cheaper than the big box expansions), which adds a new Ancient One, plus extra mysteries for the Ancient Ones in the core game, so it makes it many times more replayable, without adding to the game's already large footprint.

If you like a challenge, and are happy to lose far more than you win, then give Eldritch Horror a go, because it is worth investing your time in it for the great stories that it tells, producing memorable gaming moments.