Pay in 3 interest-free payments on eligible purchases. Learn more
Success! We will let you know when this product is available again.
Your email address has been unsubscribed!
Your email address has been unsubscribed!
Notify me when this product is available to purchase!
This email address is already subscribed to this product!
Duelosaur Island, by Pandasaurus Games, is more than just a quicker-playing cut-down version of their smash hit worker placement game, Dinosaur Island – it is a re-implementation of the theme into a two-player game of card drafting and hand management. At the start of a round you will draft park cards, which can be used in one of two ways – you need to decide whether you want to…
Read More
Category Board Games Tags Ian Moss, Kickstarters SKU ZKICK-DUELDINO Availability Out of stock
Share
Share this

Duelosaur Island, by Pandasaurus Games, is more than just a quicker-playing cut-down version of their smash hit worker placement game, Dinosaur Island – it is a re-implementation of the theme into a two-player game of card drafting and hand management. At the start of a round you will draft park cards, which can be used in one of two ways – you need to decide whether you want to spend DNA to create the dinosaur at the top of the card to entice visitors to your park, or whether you construct the attraction at the bottom of the card which can give you an increase in your hand-limit, income, or an immediate bonus. Both dinosaurs and collections of attractions will gain you end-of-game points. Central to the game are the chunky translucent amber dice (which are also compatible with Dinosaur Island) – five of which are drawn from the bag at the start of the draft phase and in an “I split you choose” mechanism, you will have to pair the dice with the pre-drawn plot twist upgrades… But your opponent gets to draft first, so you will need to give thought to the pairings you make. In the draft phase you will take turns choosing whether to draft the dice or one of the specialists who will give you in-game or end-of-game bonuses and special abilities. But be aware, there will always be one undrafted item that may increase the threat level. Players will need to keep an eye on the threat level and spend their hard-earned cash on increasing their security otherwise their visitors might end up getting eaten and they might incur a dreaded lawsuit. You can set the length of the game and once a player passes the chosen number of visitors you will tally up your final score. Players will then receive additional scoring for dinosaurs and attractions in their park, attraction sets, specialists and a deduction for any lawsuits they have. The game includes a solo mode where you can take on one of six “Artificial Intelligence CEOs” of various difficulty levels. Each AI CEO has its own reference card and they all play differently from each other to give you a different challenge each time you play. This edition of the game contains some rare Kickstarter extras, including eight extra specialist cards, two unique amber DNA dice, two temporary threat makers and a 3D moulded PR tracker. Player Count: 2 Time: 30-45 Minutes Age: 10+

Disclaimer: Don’t read if you are easily upset by dinosaur puns or Jurassic Park references! Why stick with a Tyrannosaurus Rex when you could have an Indominus rex? Superior, faster and more exciting, but can the same be said for Duelosaur Island compared to its ROAR-some ancestor Dinosaur Island. Does Duelosaur Island (designed by Ian Moss) make Dinosaur Island obsolete, should it be encased in amber and cast aside like a fossil?………. Ok, ok I’m done.

If you have already played Dinosaur Island the gameplay of Duelosaur Island will be very familiar to you and easily transferable. As you would expect, Duelosaur includes a lot of the mechanics of the original, as well as a more streamlined turn structure. Each round consists of four phases; Income, Draft, Build and Visitors. You determine the game length by playing to a set number of points 25(short), 35(medium) or 45(long). During your income phase, you each take your basic income of three coins. This increases for every gold mark reached on the excitement level track (+2 coins) and then for each food icon that has been built in your park (+1 coin). 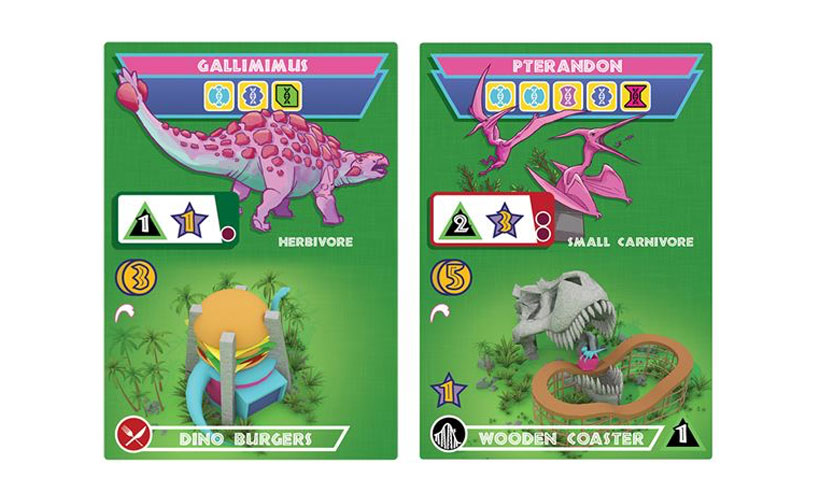 Your park is built up with the duel use cards that are acquired mainly through the income phase. In turn order, cards are taken from the lineup or the top of the deck. The first player will roll five dice and place them in any order next to a bonus token, three specialist cards are drawn of which two are put on the board and the third is discarded. Starting with the second player dice/cards are drafted along with their included bonuses. These resources are taken immediately by adjusting your DNA levels on your player board. The remaning die or card will set the threat level for that round. Using the accumulated resources, DNA/Coins are used to create dinosaurs or build attractions in your park. Dinosaurs will gain you excitement points, which will increase your park’s threat level, I mean what's a decent dinosaur park if a person doesn't get eaten now and again. Fear not, my Mesozoic mates you can beef up your security, providing you have the coin to do so If not you will lose visitors which you need in order to win the game. Sad Times! You will gain points on the visitor's track based on your park’s excitement level, whoever is furthest behind on the visitor's track will get first dibs on the PR bonuses. Any bonus can be chosen providing it is to the left of the PR marker. The second player can then take a bonus, it has to be to the left of the previous player's selection, potentially leaving the second player with no bonus. Cards, temporary threat level, and dice are reset. Players then will discard down to three cards in hand and the PR marker is moved forward one space. First player is then passed in order for another round to begin. The game ends when one player reaches/exceeds the number of points required for the game length being played. 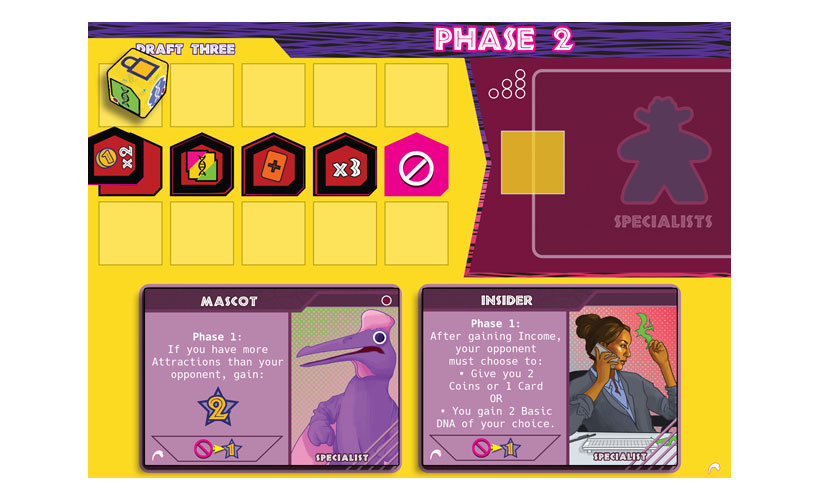 At this point there are a few questions people will be asking:

Most of these questions boil down to a couple of things, and that is player count. If you only play two-player games, like with a spouse or partner, then I would say Duel is the better game. It’s streamlined, refined and more focused on player interaction. The whole game felt de-cluttered by comparison and less overwhelming, especially for a first-time player or even someone new to gaming, this is something to bear in mind. If you want a game for more than two players then you've kind of answered your own question, but that's not to say that these two can’t coexist in your game collection. Dinosaur Island is richer in strategy and choices, but Duelosaur Island is far from lacking in this area, with ample decisions of its own that felt to impact the other player more than those present in the original. Two elements really stood out for me in Duel; The cards, not only do they give you a choice between dinosaurs or attractions, but they allow you to convert basic DNA to Advanced DNA or vice versa by way of discarding them. Making the cards a useful commodity in their own right. The second is the incorporation of the “I split you choose” mechanic in the drafting phase. Deciding which dice to go alongside the bonuses was by far my favourite choice to make. It’s this choice where the majority of the player interaction takes place and the one where it heavily influences how each players strategy unfolds. I really enjoyed Duelosaur Island. It gave me the theme, gameplay and visual explosion of Dinosaur Island in a much more accessible clean design that doesn’t compromise too much on choice and strategy.