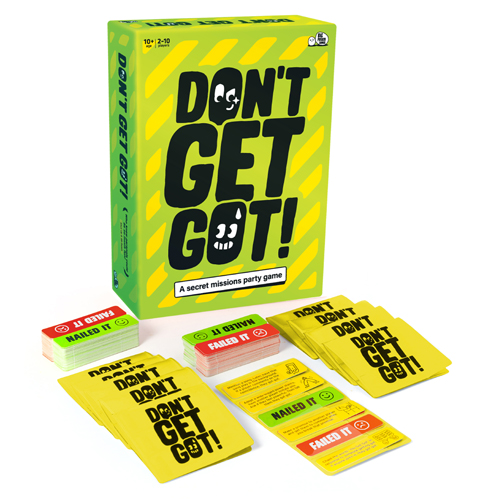 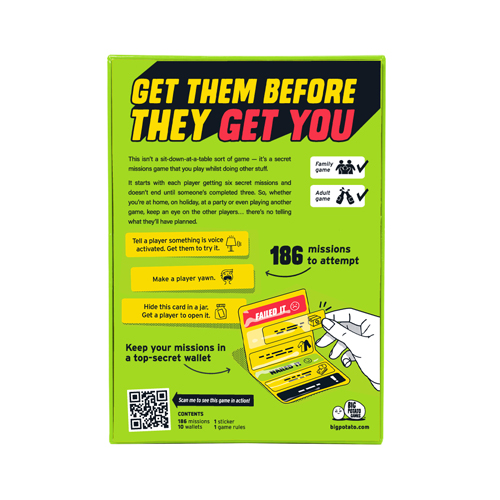 Don’t Get Got is a game of secret missions for 2-10 players, and it takes place while you go about your day. Perfect places to break out Don’t Get Got would be living with housemates, at work, on holiday, at parties, even at gaming conventions. Each player gets 6 unique secret missions that involve getting another player to do or say something specific. The first player to compl…
Read More
Category Board Games Tags 6-8 Years, 9-11 Years, Best Sellers, Big Potato, Companion App, Fun For All the Family, Golden Pear, Podcast Approved, Value For Money, Zatu Platinum Award SKU ZBP-DGG03UK Availability 3+ in stock
Share
Share this
91%

Don’t Get Got is a game of secret missions for 2-10 players, and it takes place while you go about your day. Perfect places to break out

Don’t Get Got would be living with housemates, at work, on holiday, at parties, even at gaming conventions.

Each player gets 6 unique secret missions that involve getting another player to do or say something specific. The first player to complete 3 missions wins.

In this special edition, the team at Shut Up & Sit Down has teamed up with Big Potato Games to create a brand-new edition of with 120 new missions and an aggressively orange colour scheme.

Also included in this Shut Up & Sit Down Special Edition are 10 plastic wallets and 1 collectible sticker.

If you already own Don’t Get Got, this box will work as a very generous expansion, doubling the amount of missions in the base game and letting you play with up to 20 players.

New Year’s Eve to me, is not a proper party without one or two party games! I love getting family and friends round a table and playing some of the classics. Codenames, Obama Llama, Decrypto and One Night Ultimate Werewolf all make appearances at our New Year’s Eve parties but one game has stolen my heart and will quickly become a staple of a family party. That game is Don't Get Got!

Don’t Get Got’s premise is very simple. Each player is given six tasks to complete throughout an evening. Or within a time limit if decided by the organiser. The players will place these tasks into a wallet and it is down to them to complete them without the other players cottoning on to their scheming ways! Complete it, and you have the joy of revealing to the group who you tricked into completing the task, and flipping the task card over to the “Nailed It” side.

If however, you are in process of attempting to get another player to complete the task and they ask you if its part of the game, you’ve failed, and must switch the card to the “Failed It” side, something that you really don’t want to happen! The tasks offered up by the game have a fantastic variety.

Without spoiling too many cards, one task is to seal the task card into a jam jar and get someone else to open it and find the card. Thankfully, there is one task that is impossible to fail and every player will be given this task before starting. It’s simple; get another player to answer “what” when you ask “Guess What”! While you may think this is an easy trick to avoid, you will be very surprised as the game goes on, as your guard drops slightly and you become slightly more vulnerable to the ongoing attempts of other players trying to trick you into doing these tasks.

The winner, as stipulated in the rulebook, so the first person to complete three tasks, however on each occasion I have played this, we have just let the game run as you’ll find some people will find it very easy to do three in no time at all! It’s a very simple premise but is it one that lets this game flourish?

I have to start off by saying, I ADORE Don’t Get Got! For a game so simple to understand and easy to play, you get some great traction with it. Especially since it just seamlessly runs in the background of whatever event it is being played at. You simply need to hand out the tasks and wallets. Then, you are pretty much ready to go. I have found each time I have played this, people throw themselves into it. The tasks aren’t outrageous. Meaning most are possible without people finding themselves well and truly stumped. The fact that it just fits into most environments is a real draw!

I’ll be honest, I was a little apprehensive at first. Feeling that this was a little bit too out there and I was worried that people may not be willing to get involved. Or may lose interest throughout the game duration. I think the fact that this runs alongside whatever you plan to do for the event or party means that this loss of interest is completely negated. People will still have it on their minds and will still be involved. However, won’t be tied to just playing the game. This also enables many a funny moment to occur when people are caught out doing something completely unrelated to the task!

Big Potato Games seem to have countless recipes for excellent board games and this is certainly a hit for me! It is definitely a game that is suited to both gamers and non-gamers alike. It's one that once played, will want to be played again and again. At a recent Christmas party, we ended up playing three rounds of it. Something that is possible thanks to the many tasks included! I think my only drawback to this game is one that is less about the gameplay. It's more about the physical game itself.

The box is obnoxiously large for the contents included in it. Yes, the quality of the components is great, however I feel the packaging is a little overboard for what is included in the box. This is a minor gripe however and certainly shouldn’t draw away from how great this party game is!

Don’t Get Got has taken a very simple idea and turned it into a great party game. It can be enjoyed by all and will be requested time after time by those that enjoy it. I can certainly see scope for expansions as well, with a Christmas edition having been released this year.  If you want to fire up your party, especially as we enter the holiday season, then Don’t Get Got is your game! Expect fantastic results and an incredibly competitive atmosphere when you get this box out. Just remember, whatever you do, Don’t say WHAT!