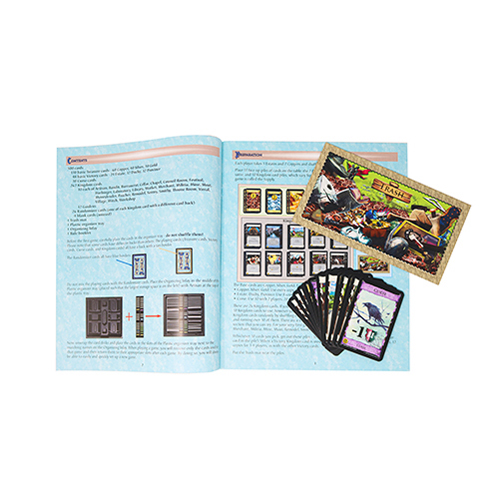 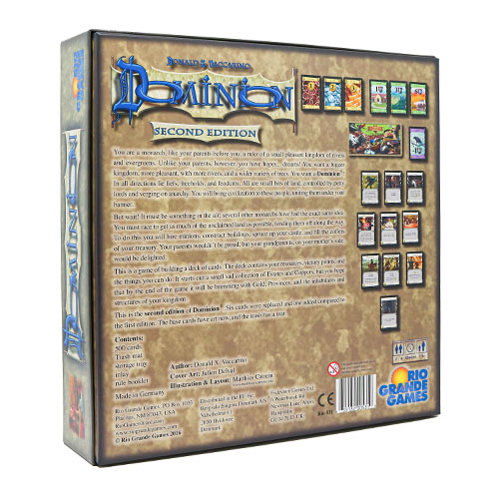 you could earn 3275 victory points

you could earn 3275 victory points

Dominion is the classic deck-building card game and the Second Edition was published by Rio Grande Games in 2016. Dominion is a card drafting game, where over time you improve your deck until the game ends, and the total victory points in each deck is compared to find the winner. Each player starts with a 10-card deck of victory point cards and treasure cards, and each turn draws f…
Read More
Category Board Games Tags Best Sellers, Dominion, Rio Grande Games SKU ZBG-RGG531 Availability 3+ in stock
Share
Share this

Dominion is the classic deck-building card game and the Second Edition was published by Rio Grande Games in 2016. Dominion is a card drafting game, where over time you improve your deck until the game ends, and the total victory points in each deck is compared to find the winner.

Each player starts with a 10-card deck of victory point cards and treasure cards, and each turn draws five cards from their deck. Treasure cards can be spent to buy action cards, victory points, or more treasure, and each game will have a different 10 action cards available. Each time your deck runs dry, you shuffle your cards to form a new deck, which will be slightly different each time due to the new cards you have bought.

Some action cards will allow you to “attack” your opponents, affecting their deck or hand somehow, and others will affect only your own hand and deck, however they have a varied cost and affording the pricier ones will require more treasure.

Each turn you first play your action cards from your hand, then you can use your treasure (and bonuses from action cards) to buy cards from the centre of the table, and then finally you clean-up all your cards and put them into your discard pile (which will be shuffled to form your next deck at a later point). As the cards which give you victory points have no benefit before the end of the game, there is a chance you may end up with a hand of just victory points - a completely useless hand.

There are other occasions where someone’s turn may seem to drag on as they are constantly drawing more cards (due to action card directions) but never really seem to achieve anything. However, with a carefully crafted deck, and the right hand, Dominion gives you the chance to build a punishing combo of moves, limiting your opponents and giving yourself access to strong cards and multiple victory points.

Dominion ends when three piles of action cards are depleted or when the highest victory point cards run out. You can bet that a good action card will be popular early on, so sometimes the piles can run out quickly and knowing when to start collecting victory points is the real art of the game. Trying to keep your hand as strong as possible, without clutter from victory points until the right moment is key.

Dominion has 26 different action cards to play from and as each game only uses 10, the game’s replay-ability and variation is enough to keep things interesting. There are also a large number of expansions making this a great game that you will keep wanting to come back to and I strongly recommend getting it.

Dominion, from designer Donald X Vaccarino, won the Spiel des Jahres game award back in 2009. I can’t believe the game is almost 10-years-old, but it’s definitely a classic and for us it has become a shelf staple – a game we’ll probably never get rid of.

Dominion was the first board game we actually chose together to start our collection and I remember opening it on Christmas day and playing it over and over again. That was either three or four years ago, and we’ve since expanded it, but it’s still being played and enjoyed.

At the start of a game of Dominion you will set-up 10 available piles of cards. These cards form a market along with the stacks of money and province cards. Your main game objective is typically to gain the province cards, which provide victory points. However these cards are expensive, so you will need to invest in better money cards, and cards from the market which give you special actions to improve your hand or hinder your opponent's.

Dominion is a deck-builder and as such you start the game with a deck of lacklustre cards, in this case seven copper, the lowest domination of coin, and three estates, the worst victory point cards. You have a hand of five cards and on your turn you may play any number of money cards to purchase one card from the market.

As the game progresses your deck will get filled with better cards, allowing your of afford the more expensive victory point cards, but should you invest in them too early you may find that your hand is full of victory point cards rather than money and seizes up!

In addition, you may play one action card per turn, these cards may provide you with extra money, extra card draws, the chance to buy two cards this turn, or even provide extra actions allowing you to chain multiple action cards together. These are where the meat of Dominion lies, as each game you choose 10 different kingdom cards from the 25 different kingdom cards supplied, even the base version of Dominion has 3,268,760 different variations!

A game of Dominion ends when either the stack of provinces (the highest value victory point cards) empties, or three of the decks in the market have run dry, at which point each player will count the number of victory points in their deck, with the player with the most winning.

Dominion is (arguably one of) the first deck-building game. Many have tried to emulate the Dominion experience, some games successfully, others not so much so. With the vast number of games coming out these days it’s important not to forget the classics. There is a reason Dominion has so many expansions, the gameplay is simple compared to many modern deck-builders, but simplicity is no bad thing.

It’s easy to pick up, but each game provides different tactical decisions. Games with the which give you a ‘take that’ element as you curse your foes, which can be countered by investing in the moat or in cards that can remove the curses from your deck. Perhaps you want to ignore the kingdom cards almost entirely and just focus on having a deck filled with gold instead?

Each game gives you different potential strategies, but as everyone has the same access to cards in the market it’s hard to cry foul when someone beats you. With 10 cards available in the market it’s rare that two players will attempt the same strategy and it can be fascinating seeing how divergent people’s decks get when given the same opportunities.

On the negative side, Dominion is often called themeless. While this is a little unfair the generic medieval theme isn’t the most engrossing, and you’ll soon be ignoring the theme of the cards for the mechanics. Some card combinations simply aren’t as fun as others, playing with cards that attack other players without giving people a way to defend themselves can become quickly un-fun as your deck becomes seized up with curses.

But with over three million combinations, it’s inevitable that some are going to be better than others. Dominion remains a great game to this day and is one well worth a try.

Dominion has been one of my favourite games for a long time. I love customising my deck throughout the game, trying to keep it focussed and improve the quality of the cards in the deck whilst balancing the right moment to start filling it with victory point cards that take up valuable space in my hand.

95% of the time, we play Dominion with two players and it’s a really quick game that’s fast to set-up and has very little down time when both players are experienced and focused on what cards they want. Amy is definitely the best at recognising really powerful combinations, but I’m probably the more efficient player overall and win slightly more often.

Deck-building has become a really popular mechanism in games, really proving how powerful Dominion has been. Some games stick to the core concepts that Dominion introduced whilst others have mixed deck-building with other mechanisms, creating many complex game designs. I love many deck-building games, such as Star Realms, Clank and many more, but I still come back to Dominion sometimes when I want a familiar, relaxing game.