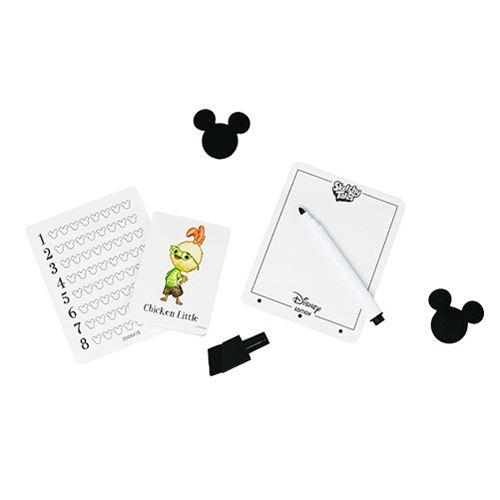 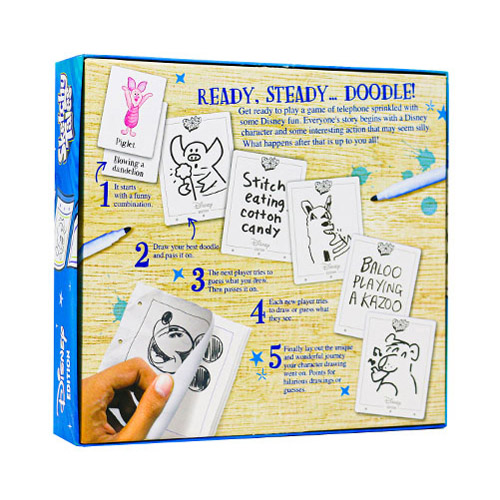 you could earn 1396 victory points

you could earn 1396 victory points

Disney Sketchy Tales combines the magical storytelling and characters you all know and love with the hilarious confusion of Sketchy Stories gameplay. Finally! A drawing game for large groups of people who are terrible at drawing! Based on the parlor game ‘Telephone’, this is one of the best doodling and guessing boardgames for teens and adults around. Just like most party games …
Read More
Category Board Games Tags Big Potato, Disney, Family, Fun for Kids, Party SKU ZBP-DST01 Availability 3+ in stock
Share
Share this
75%

Disney Sketchy Tales combines the magical storytelling and characters you all know and love with the hilarious confusion of Sketchy Stories gameplay. Finally! A drawing game for large groups of people who are terrible at drawing! Based on the parlor game ‘Telephone’, this is one of the best doodling and guessing boardgames for teens and adults around. Just like most party games for large groups, the rules are simple. Everyone chooses a scenario card, then tries to sketch it before passing it on. The next player then writes down what they think the drawing is, then passes it on once again for the next player to draw. By the time everyone’s delightful drawings and guesses pass through their friends’ weird minds, things will have gone horribly wrong. Then it’s most grins wins!

As a fan of both Disney and the game Telestrations, Disney Sketchy Tales seemed a no-brainer. It's a perfect combination of the two.

For anyone unfamiliar with Sketchy Tales, the concept is simple: Chinese Whispers meets Pictionary.

Each player draws two cards: a character and an action. They then draw, using the card prompts, to create an amusing scene with a well-known character. The aim of the game? To see if your original image remains the same as you pass it through a group of three to seven other people. The reality? Good luck being able to remember what your image was by the time your board rolls back around!

How the Game Works

Each player starts by picking from one of the eight character cards. There's a great selection of beloved Disney princesses and Pixar protagonists. This card will become the back of your 'board' and will make sure you can identify your own as you pass them around. Everyone takes as many blank 'Sketchy Tale' cards as there are other players. From here, choose at random one of the smaller double-sided character cards and a double-sided action card. Start creating your scenario using your whiteboard marker and your 'board'. Once you have created your masterpiece, pass it on to the person next to you and wait to receive their drawing.

The next challenge is to guess what that person has drawn. Who would have thought Sully from Monsters Inc. could look so similar to Wreck-it Ralph?! As you decipher the scene in front of you, you write your answer on one of your blank 'sketchy tales' cards. Slot it over the top of the original drawing, pinning it in place with your Mickey head clip. As your board makes its way around the group, you will giggle and laugh and come up with things you never would have thought Disney characters could do ("sneezing out popcorn" for instance!). At the end comes the big reveal - what did your original masterpiece turn into? Do you see any semblance of your original drawing in what the final person came up with? In the unlikely event your original combo matches (or is pretty much a match), you score three points. The game is officially over when a player scores two more points than the number of people playing.

The game has some wonderful features:

A few small downsides of the game design are the, albeit super cute, Mickey head clips. They unfortunately have a habit of flying off the top of the board and getting lost. Additionally, although the box is travel-sized, the spaces inside the box don't seem very well designed to fit all the cards. Some end up spilling out and rolling around the top of the box. This can be a bit of pain if you have taken the game on the road.

Disney Sketchy Tales is family-friendly and a super great way to keep a large group entertained, as up to 8 players can join in. For us, this is one that is often brought out at family events and is an instant hit! We tend to abandon the scoring as we so rarely get any matches, but we never play just one round. It always feels like you need a 'warm up' round. After all, you don't need more snarky comments about how bad that drawing of Nemo was! It's simple to learn, with the rule book being just two pages, and easy to play for all ages. I would encourage you to play with at least some people who know Disney, but watching someone who has no idea of any Disney characters try to name that shapeless blob you just handed them is a whole new game of its own!