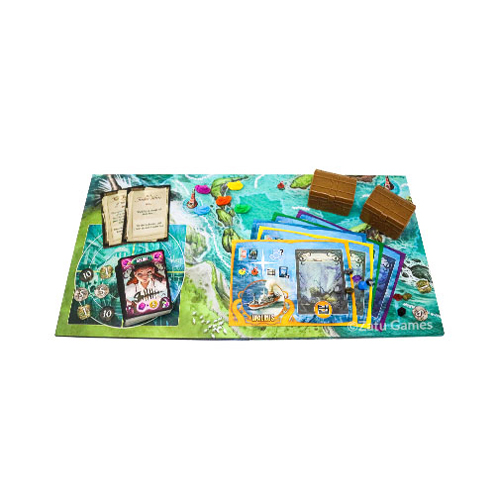 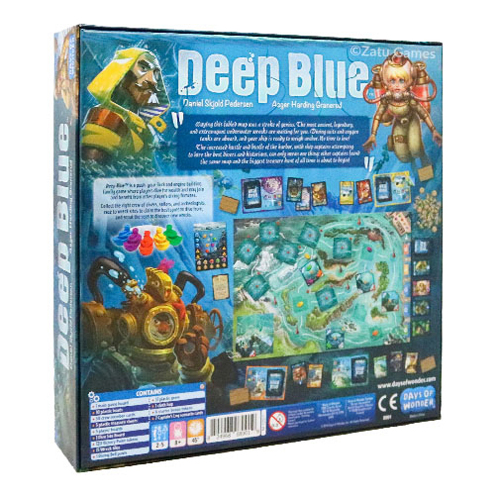 Pay in 3 interest-free payments on eligible purchases. Learn more
Success! We will let you know when this product is available again.
Your email address has been unsubscribed!
Your email address has been unsubscribed!
Notify me when this product is available to purchase!
This email address is already subscribed to this product!
Buying this fabled map was a stroke of genius. The most ancient, legendary, and extravagant underwater wrecks are waiting for divers. Diving suits and oxygen tanks are aboard, and the ship is ready to weigh anchor. There’s no time to lose! The increased hustle and bustle of the harbor, with ship captains attempting to hire the best divers and historians, can mean only one thin…
Read More
Category Board Games Tags Asger Harding Granerud, Daniel Skjold Pedersen, Days of Wonder, Dice Tower, Great Gifts SKU ZBG-DOW8901 Availability Out of stock
Share
Share this
78%

Buying this fabled map was a stroke of genius. The most ancient, legendary, and extravagant underwater wrecks are waiting for divers. Diving suits and oxygen tanks are aboard, and the ship is ready to weigh anchor. There's no time to lose! The increased hustle and bustle of the harbor, with ship captains attempting to hire the best divers and historians, can mean only one thing: Other captains have the same map, and the biggest treasure hunt of all time is about to begin!

Deep Blue is a press-your-luck and engine-building, family game in which players dive for wealth and may join and benefit from other player's diving fortunes. In this game, players have to collect the right crew of divers, sailors, and archeologists, race to wreck sites to claim the best spots to dive from, and scout the seas to discover new wrecks. Players have to take risks if they want to be the most wealthy diver!

I pre-ordered Deep Blue without knowing very much about it. I was lured in by beautiful box art like a siren singing to a sailor off a foggy coastline.

The fact it was published by Days of Wonder was also a massive contributing factor. Their list of games includes Ticket to Ride and Small World, firm family favourites in my house. They also publish Five Tribes, Memoir 44 and Quadropolis, all favourites in other households I’m sure.

I am aware many heavyweight gamers have been a little unkind about Days of Wonder productions recently. However, I am a light to medium weight board gamer, as are those I play games with. Therefore I take these comments with a pinch of salt.

Deep Blue is designed by Daniel Skjold Pedersen and Asger Harding Granerud. Between them they have created Copenhagen, Flamme Rouge and Panic Mansion. The game took them around six years to get just right and is a game which they describe as a ‘passion project’.

Having purchased the game, I can now give you lots more information that wasn’t available to me when I dipped my virtual hand into my virtual wallet and spent real money on Deep Blue. So without further ado – let’s dive into the review!

Deep Blue is a deck-building race around a board trying to get as many victory points (VP) as you can. On your turn you have four available actions to choose from, you can hire staff, move, go on a dive or rest.

The staff cards of the game will give you additional movement, additional money, dive bonuses, or combinations thereof. They might also increase the crystal count inside the dive bag. You get a few basic ship cards at the start of the game to get you going. When you use a card, it gets turned face down on the player board. Resting is the only way of replenishing your cards but this only restores 3 cards at a time.

When you navigate to a dive site you can lead a dive on your next turn. You gain VP and bonuses for doing so. However, any other ship on an adjacent space can also join the dive, benefitting from the spoils and their own bonuses too.

Dives consist of delving into a bag and drawing a gem blind. Most will gain you VP, a few will require specialist staff to benefit fully. Blue and black gems represent hazards: blue being low oxygen and blacks being some sort of harmful water creature. These hazards have to be defended or they will force you to resurface losing the benefits of the gems you have collected. However, VP are still gained from card bonuses that are played throughout the dive.

The game ends when four particular dive sites have been explored, regardless of whether all the other sites have been scavenged or not. When diving these four sites special rules come into play too.

The box states that this game is for 2-5 players. I’m sorry it’s just not. For this to work as a two player game some additional rules needed to be implemented to stop it becoming a boring, monotonous card grab and an almost infinite dive fest. When I played for the first time at 2 players we ran out of VP tokens and gave up because it was just no fun at all. It’s a shame because a few rules to adapt play by limiting how many cards each player can hold or removing some black/blue protection cards would’ve probably been sufficient. Now I have got that off my treasure chest I can start to talk how it plays with 3-5 players…

The game balances nicely and raises the question of when to move, hire, rest (often) or dive very nicely. Play moves round relatively quickly as you have pretty much worked out what you want to do whilst others are taking their turn. The only slightly slower element is the dive, but, as you will try and be part of these too, you are involved enough not to be twiddling your thumbs. In terms of interaction players will converse probably as much as you would do while playing Ticket to Ride.

The dives themselves can be suspenseful. However,the push your luck element is slightly mitigated by knowing what protection you have from your cards before the dive. The crystals themselves aren’t particularly valuable, so you sort of know when it is worth pushing your luck and when it is not. Occasionally a rush of blood goes to your head and you brazenly dive again against the odds and that is when the real tension sets in. You will also be hoping to cause any others on the dive to resurface and not get the same spoils as you.

In terms of weight, Deep Blue feels like it should be a great entry level game, and to a degree it is. However, in the first few plays I found questions arose and the answers weren’t always easy to find or, when found, crystal clear in the instructions. I would say I now have grasped it fully and anything that wasn’t clear has now been settled in the ‘house rules’.

I find it really hard to remember to play the additional rules on the four special dive site tiles. They have extra compass points on them but I think a picture of the Captain’s Log (which grants the special rules) would’ve made remembering a lot easier. I know it is my fault, but I bet others will have the same issue too.

The box art for Deep Blue is a thing of beauty. You could almost frame it and enjoy it on the wall. Lifting the lid of which reveals an amazing compartmentalised interior where everything has its place. No one will be creating an insert for this game, it is already close to perfect.

The components housed and nestled within are pulchritudinous. For a start there are plastic treasure chests with hinged lids to store the victory point tokens that look like gnarled coins, similar to those in Small World. The crystals and gems are all the same shape so there is no cheating when pulling them from the essentially black bag. The tiles and board have great artwork and the cards boast creative seafaring characters. Finally, the boat player tokens are bright, colourful and beautifully moulded. All in all, the production value of this game is very high and I love it.

For a push your luck game there isn’t that much pushing of luck, which may be a good or bad thing depending on your standpoint on luck in board games. For me, Deep Blue loses some important tension as this mechanic is watered down. That said, I have had plenty of edge of my seat moments when playing too.

Perhaps more luck-based is whether the staff cards you want are still there when it’s your turn. This can be more detrimental to play than what you pull out of the bag.

The lack of a viable two-player option does let this game down. Which is strange, because if the box didn’t say 2-5 players and instead said 3-5 it would’ve scored everso slightly higher and I would’ve still bought it. Perhaps I am therefore being a little pedantic. The instructions could’ve been tighter in other ways too.

Overall it is great fun to play and works well as a family game too and the advised age of 8 plus is pretty much spot on.

Deep Blue is a feast for the eyes. It is truly gorgeous and its table presence cannot be disputed. It is also lots of fun to play and I can see me putting it onto the table plenty of times in the future.