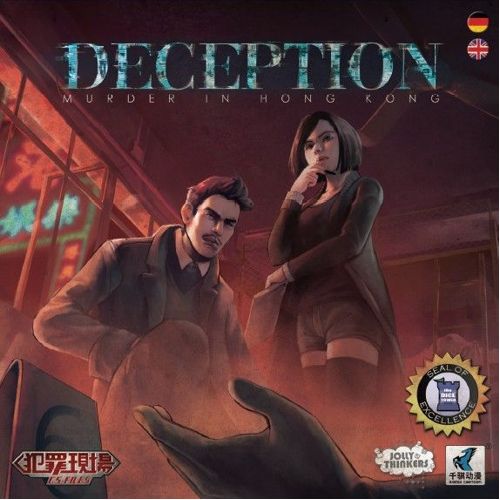 you could earn 5349 victory points

you could earn 5349 victory points

Add to Wishlist
Deception: Murder in Hong Kong is a game of deduction and deception for 4-12 players that plays in about 20 minutes. In the game, players take on the roles of investigators attempting to solve a murder case – but there’s a twist. The killer is one of the investigators! Each player’s role and team are randomly assigned at the start of play and include the unique roles o…
Read More
Category Board Games Tags Deception, Golden Pear, Tobey Ho SKU ZBG-PJOL01 Availability 5+ in stock
Share this
80%

Deception: Murder in Hong Kong is a game of deduction and deception for 4-12 players that plays in about 20 minutes.

In the game, players take on the roles of investigators attempting to solve a murder case  but there's a twist. The killer is one of the investigators! Each player's role and team are randomly assigned at the start of play and include the unique roles of Forensic Scientist, Witness, Investigator, Murderer, and Accomplice. While the Investigators attempt to deduce the truth, the murderer's team must deceive and mislead. This is a battle of wits!

The Forensic Scientist has the solution but can express the clues only using special scene tiles while the investigators (and the murderer) attempt to interpret the evidence. In order to succeed, the investigators must not only deduce the truth from the clues of the Forensic Scientist, they must also see through the misdirection being injected into the equation by the Murderer and Accomplice!

Find out who among you can cut through deception to find the truth and who is capable of getting away with murder!

During the game, the Forensic Scientist is NOT allowed to hint to the solution with words, gestures, or eyes.

Murderer x1
When the crime takes place, the Murderer chooses 1 Clue card and 1 Means card as the solution to the crime. These will be the Key Evidence and Means of Murder respectively.

The Murderer tries to hide their role and look for a scapegoat. Even if they are identified, the Murderer still wins the game if no one correctly identifies both the Key Evidence and the Means of Murder.

Bear in mind that the Murderer (and sometimes Accomplice) is among the Investigators! The innocent Investigators must make a vigorous effort to defend themselves from false accusations.

If the Murderer is arrested but can identify the Witness, the Witness is considered to be killed, allowing the Murderer and the Accomplice to get away with murder and win the game.

I love a good murder mystery almost as much as I love any game where you get to deceive people, so I was incredibly keen to get my hands on Deception: Murder in Hong Kong!

Deception: Murder in Hong Kong (designed by Tobey Ho) is a social deduction game for 4-12 players. The narrative involves investigators trying to solve a murder. One player acts as the forensic scientist giving clues using a series of scene tiles, and investigators must try to interpret them. Sounds simple enough, but hiding among this band of investigators is the murderer, who must manipulate the discussion to try to move the blame away from themselves. Roles are randomly assigned, and there are fun additions of the witness and the accomplice who can make things even more interesting in larger groups.

The set-up is pretty straightforward. Shuffle the blue ‘means of murder’ cards and the red ‘key evidence’ cards, and place four of each in front of each player. Then give each player a badge token. Put out the ‘cause of death’ tile and the four location tiles, before putting the remaining tiles face-down in a draw pile. Place the bullet markers on the table. At this point, each player is given their secret role card.

With six or more players, Deception gets far more complex with the addition of the witness and the accomplice. The witness knows the identity of the murderer, but not their murder weapon or key evidence. This would make things very hard for the murderer, but the game balances this out well with one caveat – if the murderer can guess the identity of the witness at the end of the game, they win. This gives the witness the tricky job of leading investigators towards the murderer while not giving themselves away. The accomplice knows everything the murderer knows and wins if they win, and this can be a lot of fun if the two players work well together to support each other’s arguments. 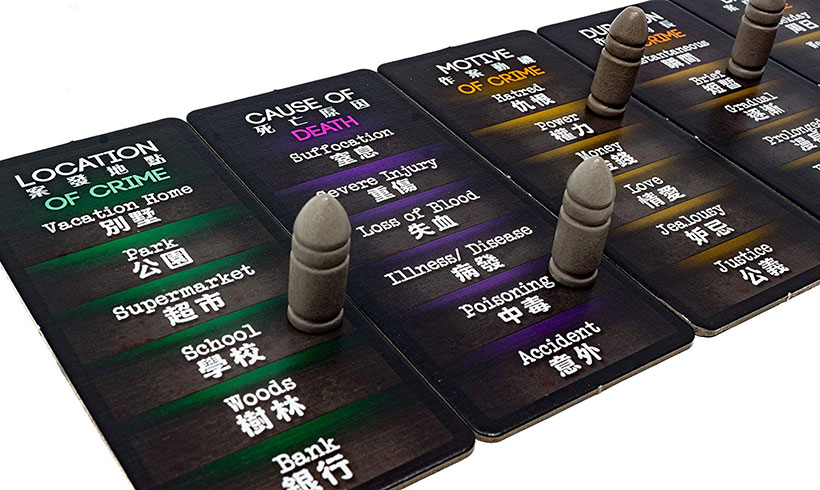 The social deduction element of Deception plays out well because players are judged on the arguments they put forward and everyone gets an equal turn to speak. The focus is also on solving the clues, rather than just arbitrarily pointing fingers at people, which can be an issue with some similar games. But the clues are still vague enough that, if you are the murderer, you can usually steer people towards someone else. The scene tiles add a luck element – there are some rounds where the clues are too specific and the murderer doesn’t stand a chance. This is probably a flaw of the game, but it’s a quick enough game that if the murder is solved too easily, you can just play again.

The artwork suits the theme and the card design is simple an effective. My only criticism here is that if trying to play in low light the dark colours can be hard to distinguish between, and the palette can look a little bland. But the pieces are well made and the game has everything it needs.

Deception: Murder in Hong Kong combines the ‘find the bad guy’ element of other social deduction games with a clever mechanic for giving clues. It plays a lot like Mysterium, but with the added complication of someone working to actively sabotage the clues. The forensic scientist is probably the most fun to play, which might not be a good sign, given that they are excluded from the main gameplay.

Deception: Murder in Hong Kong is an easy game to learn and a good one to bring out at a party. Each game lasts about 20 minutes so you can usually play a few rounds. It also has enough strategy involved to please more serious gamers.