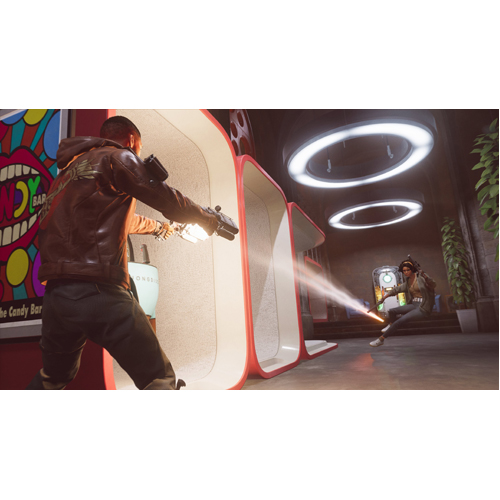 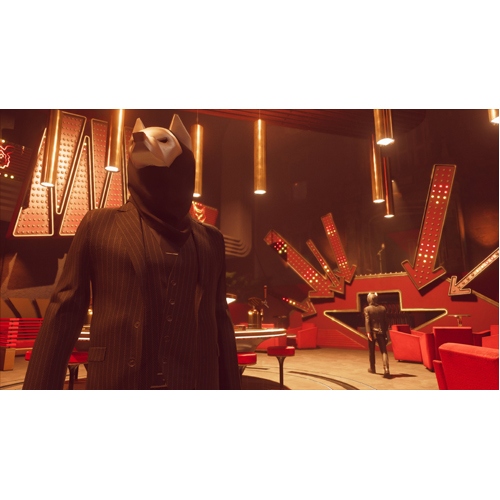 you could earn 4709 victory points

you could earn 4709 victory points

DEATHLOOP is an innovative first person shooter from Arkane Lyon, the award-winning studio behind the critically acclaimed Dishonored franchise. The studio’s new IP will continue Arkane’s signature gameplay design, challenging gamers to play their own way.

As Colt, players are trapped in a time loop on the enigmatic island of Blackreef, doomed to repeat the same day for eternity. The only chance for escape is to break the loop by unearthing information and assassinating eight key targets before the day resets. However, lurking in the shadows is rival assassin Julianna, equipped with her own equally powerful abilities and weapons, on a mission to protect the loop by assassinating Colt, and restarting the cycle. Players can also choose to take control of Julianna, turning DEATHLOOP into a deadly game of hunter-vs-hunted.

Features:
• Signature Arkane Gameplay: Arkane’s reputation for unique immersive gameplay will allow players to choose their preferred playstyle, stealthily sneaking through levels or barreling into the fight, guns-blazing. Armed with a powerful roster of otherworldly powers, as well as an arsenal of savage weaponry, players will combine these deadly tools for takedowns that are as striking as they are devastating. By choosing their powers and weapons, players will fight to survive this deadly game of hunter vs hunted.

• Exclusively for Next-Gen PlayStation 5: DEATHLOOP is a new IP for a new generation. The game will leverage the console's graphics to bring Arkane’s unique artistic vision to life like never before and will take advantage of new cutting-edge features, like haptic feedback and adaptive triggers, to make each encounter feel unique and impactful.

• Arkane’s Single Player Gameplay Injected with Deadly Multiplayer: DEATHLOOP is Arkane’s take on an assassination multiplayer experience, seamlessly blending single player gameplay with multiplayer drama. Players will experience the main story as Colt, hunting down targets across the island of Blackreef to break the loop and earn his freedom. Players can also choose to take control of rival assassin Julianna, sneaking into another player’s campaign to kill Colt and keep him imprisoned in the loop. The multiplayer experience is completely optional, and players can choose to have Julianna controlled by AI within their campaign.

• Loops = Knowledge, Knowledge = Power: Each new loop in DEATHLOOP is an opportunity to learn from the past and adapt. Finding clues and uncovering hints is key to taking out targets before the day resets. Discover relationships, learn schedules, and do whatever must be done to gain the necessary knowledge. Players will apply what they’ve learned in previous loops to try different paths, choose to sneak or attack, and devise other new strategies to eventually reach their targets. If at first you don’t succeed: die, die, again.

• The Island of Blackreef - Paradise or Prison: Arkane is renowned for magnificently artistic worlds with multiple pathways and emergent gameplay. DEATHLOOP will present a stunning, retro-future, 60s-inspired environment, that feels like a character within itself. While Blackreef may be a stylish wonderland, for Colt it is his prison, a world ruled by decadence where death has no meaning, and delinquents party forever while keeping him captive.

2021 was not quite the patch for 2020 that many of us hoped for. And so, it was another year where pixelated escapism was a welcome balm. I was on the lookout for any games to tickle my nerd-fancy (bit gross), and this did just that. Deathloop: the highly anticipated outing from Arkane Studios. Some of you may have seen the preview by Tom Harrod for Zatu games back in 2020. Arkane is a beloved, developing cherub. They previously gifted us with Prey and the wonderfully grimy, occult-drenched Dishonored series. When Deathloop first reared its psychedelic head, some fans felt thrown for a loop. The aesthetic and deviation from Dishonored turned them off. Stealth had been seemingly swapped out for a frantic bullet ballet, and this understandably worried some of us. Thankfully, the concern was unwarranted.

Deathloop sees us take the role of Colt. Grouchy and confused in equal measure, Colt tries to recover his memory - through the teasing and butchering of the enigmatic Julianna. An almost too patient tutorial gradually shows us that Colt is on the island of Blackreef. Blackreef is a place of temporal anomalies, harnessed by a new community to replay the same day for eternity. Familiar notion? Unfortunately, everyone there celebrating the 'First Day' did not get exactly what they signed up for. Their memories do not carry over when the loop resets. Loops-a-daisy! Their first day becomes their every day again and again. All except for Julianna, who remembers everything, as does Colt (usually). To break the loop and stop the day from resetting, Colt must kill all eight founders of the community, the lofty 'Visionaries', in one day. Thus begins the gaming version of Groundhog Day - albeit with a tragic shortage of Bill Murray. Thankfully, there is a generous helping of gun-toting, flamboyant, murder-fun.

So, first, the chunky mechanics in this entertainment soup - or stew, if you prefer. The day splits into four time periods and the island into four different areas. Whenever you move to another area, a portion of the day passes. If you die three times (through an embarrassing lack of awesomeness), the day automatically ends and resets. The ultimate goal is to arrange the targets in such a way that you can eliminate them all in one day. You learn their secrets and motivations. Ultimately, they will dance like puppets to your macabre tune and waltz right into your crosshairs. Is one of your targets too obsessed with his work to attend a party? Sabotage his work in the name of homicidal liberation. The domino effect of organising the diaries of your enemies takes time but is oh so satisfying and well-paced, at around 20 hours. Deathloop does a great job of avoiding tedious repetition and is instead a clever carousel of carnage. The satisfaction of learning and exploiting this clockwork world is immense. Like Tom Cruise in Edge of Tomorrow, you know what is around the corner and the best or most amusing way to make it die. At your disposal are guns and 'slabs', which are items imbued with powers familiar to fans of Prey and Dishonored. You can tailor slab abilities even more with clever and fun 'trinkets' hidden around the place. You can carry weapons, slabs, and trinkets to the next loop by spending 'Residium', a commodity you can drain from various objects and enemies.

Another featured inclusion is that Juliana will periodically appear to hunt down lovable old you. The exit to each area will close until you hack it while evading or erasing your pursuer. The hook is that, according to your connectivity settings, Julianna can be A.I, your friends, or anyone else who owns the game. You can also play as Julianna to 'Protect the Loop' in a separate game mode. Invade the happy lives of others to deliver your bullets carved from pure misery. This is a neat idea that maybe doesn't consistently work, as it's only as fun as the Juliannas make it. Encounters can be a pulse-racing game of cat and mouse. Or a tedious, lesser-known game of "cat camping next to a mine-riddled hack point with a sniper rifle keen to meet you". I guess it comes down to how much you trust the sportsmanship of the internet… ahem. Playing as Julianna yourself unlocks achievements and snazzy outfits to use as Colt. The latter perhaps is a bit redundant in a first-person product. It is at least an attempt at subverting and extending the flow of the game.

God bless that story though. The award-winning narrative is fantastic. The script is wry and entertaining without ever being irritating (like this review…right?) Listening to character conversations is always a pleasure. Each venture into an area rewards you with Colt and Julianna trading insults as freely as they exchange kills. Their fingers are always on the trigger for a snappy comeback. The script includes many realistic falters, stumbles, and wonderfully crafted tantrums that give it an air of realism. Stylish and witty, but never feeling convoluted. Julianna hangs tasty morsels of lore, dripping with story juice and dangling from the sharp stick of violence. Words as text also appear mysteriously in Colt's vision around the scenery with jibes, tips, or hints at lore. Messages from someone, or your own unravelling madness? The environmental storytelling is top-notch. Every bit of information you read is instantly summarised as a more digestible footnote on your screen. It's a rich, bizarre world where its citizens toy with art, debauchery, science, and even death. Everything is for their amusement and the passing of meaningless time. The slabs are fun but you can only equip two at each section of the day. I personally found myself using the two same abilities until the final push when I adventured boldly into trying a third. The shotguns and splinter nail guns are satisfying while others weapons are serviceable. Gunplay can expose the limited A.I that was often hidden by the stealth mechanics of Dishonored, but it's never to game-ruining standards. The time loop notion also cunningly removes any moral obligation. Players are free of any guilt in their haphazard slaughter of anyone with a simulated pulse. I vaguely remember guilt…

You can rush through Deathloop to an extent, but at the price of cheating yourself. The optional lore is well worth the strain and secrets are subtly scattered throughout the environments. Some even led me to several google searches as I happily buried my pride in a shallow grave. Alternate Colts stagger into your timeline path that winds, twists, and circles on itself as you learn to question everything. Is this the first time we've tried to break the loop? What happens if we succeed? The major falter in the fun is the execution of the ending. The conclusion splits into a narrative choice but the timing and method of the choice are a little blurry, with odd timing. The end cutscenes are nice but seem short for the investment you put in, and it's a hassle to explore each one. My main wish would be to fully open up the world on completion. Possibly the ability to choose whatever time and scenario from the menu without setup needed, to more easily explore the options you missed. Also being able to equip all slabs at once would encourage me to enjoy the island as a new playground of egotistical destruction. As it is, I was thoroughly pleased with my scrummy main course of a playthrough and felt no need to stay for dessert. Maybe a shame but this is still another fine example that single-player stories are alive and kicking with steel toe cap boots on.

Deathloop is ultimately like its hero appears: well-meaning, sometimes rough, and leaving it up to each player to decide if it's justified. For me, it was very much worth the investment. Deathloop was my game of the year, for having the pleasant decency to be immeasurably fun and addictively well-penned. This was the game I rushed home to play and smiled at the most. In another year of pandemics, forced routines, and repetitive anxieties, this was a loop that often gave me a welcome break from my own.