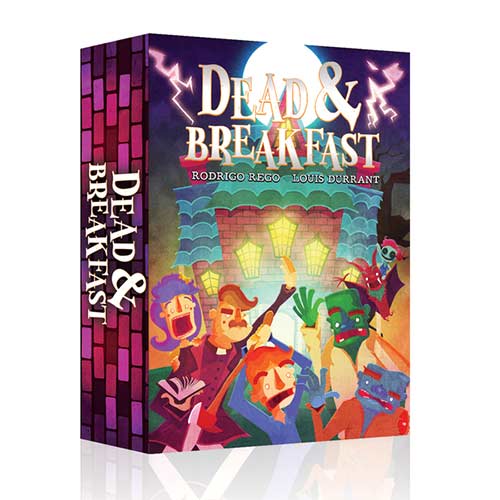 Add to Wishlist
In this game of ghoulish guesthousery, players build a mortifying motel, fill it to the brim with horrifying inhabitants, adorn its walls with voluptuous vines of poison ivy, and invite puzzled patrons in from the cold to meet their frightening finale. However, a ghastly ghoul besieges the local Haunted Hardware Store, and other enigmatic entrepreneurs are opening horrible hostels o…
Read More
Category Board Games Tags Dead & Breakfast, Gold, Rodrigo Rego, Value For Money SKU ZBCG-DEADBREAK Availability Out of stock
Share this
85%

In this game of ghoulish guesthousery, players build a mortifying motel, fill it to the brim with horrifying inhabitants, adorn its walls with voluptuous vines of poison ivy, and invite puzzled patrons in from the cold to meet their frightening finale.

However, a ghastly ghoul besieges the local Haunted Hardware Store, and other enigmatic entrepreneurs are opening horrible hostels of their own, meaning you'll have to work fast to ensure that your Dead & Breakfast is the best of the worst!

In less verbose vocabulary, Dead & Breakfast is a tile-laying game where you assemble a hotel, placing creatures, flowers, and guests to score points. Each turn, players place one of the available un-haunted window tiles into their hotel, before passing the turn to the left. Once a row (5 windows) of a player's hotel is complete, they can invite a guest, occupying one window but activating their specific scoring condition.

Once everyone has built a 5x5 hotel, points are won in three ways: inviting guests who fear the creatures that live in your hotel; connecting certain types of flowers to your door via ivy; and fulfilling the conditions of the Bonus Scoring Tile. The Hotelier with the most points wins!

Every now and again there is a game I see in a shop but then I think to myself, ‘Is this actually good or do I just like the design of the box!’ To be honest, this is also how I have picked books to read throughout my life. As games require a more substantial outlay I usually try and temper it by looking for opportunities to try games first. This is how Dead & Breakfast came to be on my game hit list. Luckily for me they were at the Games Expo and I got my wish.

The game, designed by Rodrigo Rego, is surprisingly simple and also surprisingly difficult. The key to Dead & Breakfast is to build a bed and breakfast out of bricks. The brick cards have different things on them – vines, monsters and flowers. At the beginning of the game you deal out a lobby (door) to each player. This tells the player what colour of flowers they should collect. Although this all sounds straight forward. The replay value of the games comes from its quirks:

To set-up the game you need to make a circle of six brick tiles and then place the ghost on one of them at random. Each player can only take one of the three tiles past the ghost. Then the ghost moves to the new replacement tile. Tiles come in vertical or horizontal arrangement and it often seems to be the case that you can’t take the one you want that will ‘just link it all up nicely’.

When you complete a layer of your house (five tiles wide – the final house is five tiles high) you get to pick an extra tile (guest tile). This has some flowers, some vines – which can help link in some missing connections - and a special power – i.e. extra points for a vertical layer of bats (two points per bat) or a horizontal layer of different monsters (as signified by the witch card).

If you find you cannot go at all then you have to take two wall tiles that have cross over vines and replace the three central tiles. This can sometimes seem like a good option, but it means you can’t put a bonus tile over them at any point.

The tiles are all nicely decorated and fit well in the box. There is a scoring chart around the box, however I don't think this is necessary. You score at the end of game, and we've always gone around the chart more than once. However, it can be handy to keep track as you count up the flower scores first and then the score for the guests. 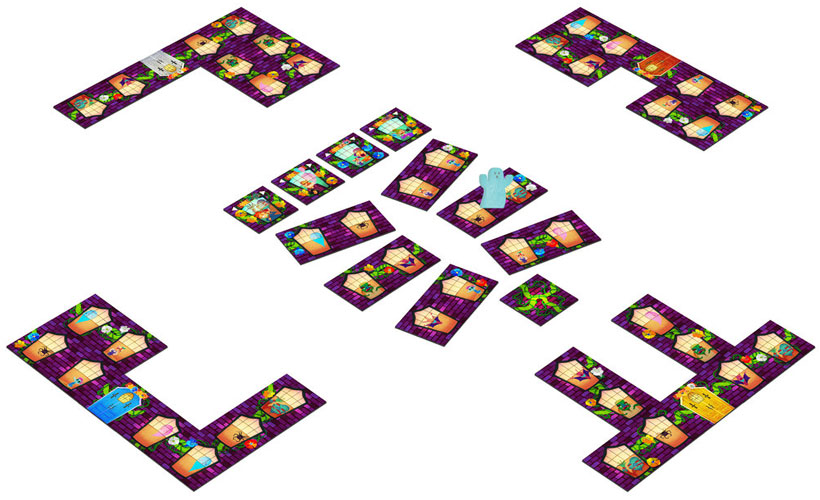 In our house the difference in score always seems tight. This is good because no one loses interest in the game. A certain element of it is the luck of the cards but the decision where to place them is obviously key. There is a balance between getting the vines connected and getting extra guest points. I am not sure I always get this right as I do tend to get a little focused on the pattern.

You can add in extra bonus tiles for the game which have their own additional points. We haven’t used this option too much. However, it's nice to know that there is somewhere to take this game in the future.

I have not tired at all of playing it yet. As a result, my feeling is that this will be a long-term favourite. My 12-year-old finds it a little tricky, but I think it is good for learning how to future plan.

Dead & Breakfast is quite a friendly game as you play in a pretty independent fashion. The guest tiles can cause a bit of competitiveness. This is especially true if you're both collection a certain flower colour. We often end up helping each other with suggestions for tiles – as there is such a satisfaction to be gained from finishing your Dead & Breakfast off, as well as just the winning.

The level of engagement with your fellow players is up to you really. It can be quite a thinky game so if you aren’t feeling chatty you can just get a bit Zen with building your ideal Dead & Breakfast.

I really do love Dead & Breakfast – which you may have guessed already. It's often my first choice if I'm looking to play a quick game. A quick game being one lasting no more than 30 minutes. It provides enough complexity to keep it interesting and you won’t mind too much if you don’t win. Having the moral high ground of a better looking hotel is more than enough!