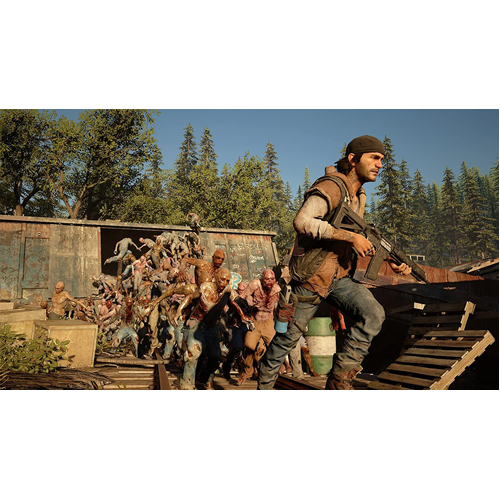 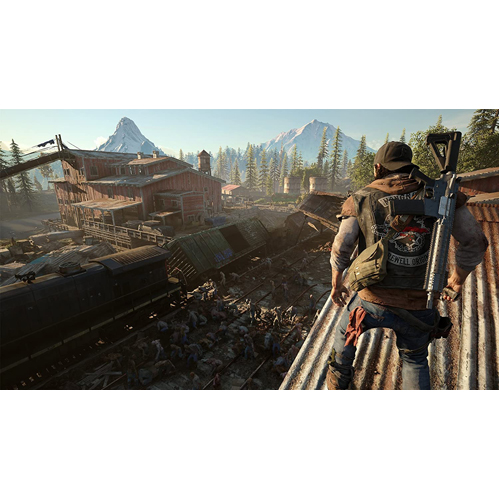 Pay in 3 interest-free payments on eligible purchases. Learn more
Success! We will let you know when this product is available again.
Your email address has been unsubscribed!
Your email address has been unsubscribed!
Notify me when this product is available to purchase!
This email address is already subscribed to this product!
Days Gone is an open-world action game set in the high-desert of the Pacific Northwest two years after a mysterious global pandemic has decimated the world, killing most but transforming millions into mindless, feral creatures. Survivors live in a world where resources are scarce, violence and murder are common and Freakers roam the wilderness. Players face this violent, new world a…
Read More
Category Video Games Tags Action/Adventure Video Games, PS4, Software, Sony SKU VCS-P4READSNY79531 Availability Out of stock
Share
Share this
80%

Days Gone is an open-world action game set in the high-desert of the Pacific Northwest two years after a mysterious global pandemic has decimated the world, killing most but transforming millions into mindless, feral creatures. Survivors live in a world where resources are scarce, violence and murder are common and Freakers roam the wilderness.

Players face this violent, new world as Deacon St. John, a bounty hunter, a Drifter who lives in the lawless wilderness outside the civilian encampments. Deacon survives by using skills learned before the world ended, riding for the Mongrels MC, an outlawed motorcycle club, where violence and mayhem were part of the riding the open road.

At the center of it all, Days Gone is an exploration of how any of us would react to these harsh conditions, and exploration of loss, love, friendship, revenge and desperation – learning that surviving isn’t living. For Deacon especially, it’s a struggle to ensure that hope never dies.

Developed by Bend Studio, Days Gone is in development exclusively for the PlayStation 4.

Expansive Open World Action – Exemplifying truly free-form gameplay, Days Gone offers freedom to explore, strategize and play “your way” in the vast high-desert of the Pacific Northwest. The hazardous environments, filled with carved out ridges, mountains, caves, cliffs mines and river basins, deliver a breathtaking backdrop to an equally diverse style of gameplay.
Emergent Gameplay – Featuring fully explorable environments and dynamic AI enemies, players will rely on their own abilities to strategize, craft weapons and tools, explore the world, and engage in combat. With almost every car, building and environment searchable, Days Gone delivers emergent gameplay possibilities, making a player’s approach to combat and discovery a vital part of the experience.
Stunning, Dynamic Graphics – Using the power of PlayStation 4 and Unreal Engine 4, Bend Studio has developed a high volume of rendering and gameplay technology to deliver an incredibly realistic open world experience. Realistic weather effects, such as rain, wind, snow and day-night cycles impact the gameplay. The game’s lighting is all real-time and reacts dynamically, the way the human iris does, as players move from one location to the next.

Days Gone is a fun mix of stealth and combat, upgrades and crafting, all wrapped up with plenty of running away from huge zombie hordes.

Days Gone starts with a familiar scene. Our hero Deacon St. John (modelled on and voiced by Sam Witwer) and his wife Sarah are trying to escape from Seattle together with Deacon’s best bud - Boozer. The streets filled with panicked crowds and overturned vehicles. No-one knows what’s happening because no-one knows what a zombie is in a zombie story. Along the way Sarah is hurt, Deacon puts her on a helicopter bound for a medical facility and promises to meet her there. But when he and Boozer arrive, the camp has already been overrun by zombies (known as “Freakers”) and everyone is dead.

Two years after the initial outbreak, Deacon St. John and Boozer have become nothing more than drifters. They carrying out odd jobs for nearby survivor camps and keep to themselves. Deacon visibly carries guilt for Sarah’s death so Boozer suggests the duo ride north and leave the painful memories behind. But Deacon’s bike breaks down and is subsequently stripped for parts, so your main goal becomes earning trust and credits at the nearby camps in order to rebuild your hog.

The motorcycle is central to everything in Days Gone. Getting around, including fast travel and saving your game all require your bike. It can be upgraded to carry more items & resources, to hold more fuel and you can tinker with the engine to make it quieter to reduce the chances of drawing any unwanted attention. You can clean it, paint it, cover it in decals and, best of all, weld spikes on the front creating a makeshift plow for getting through small crowds. The motorcycle is a well thought out aspect of Days Gone and is definitely a highlight, you’ll always want just one more upgrade.

From the outset you can do jobs for two camps: Copeland’s paranoid stronghold and Tucker’s forced-labor camp. Copeland’s has a mechanic capable of upgrading your motorcycle, while Tucker’s has weapons. Your starter bike isn’t fuel efficient, so you’ll be frequently be returning to one of the camps or hunting down gas stations in Freaker territory. This makes wandering around and doing things in the open world a little frustrating at first.

Early missions consist of standard bounty-hunting and rescue jobs in which you go to a place, track a person, and then kill some bandits or Freakers. They mainly serve as gentle tutorials to give you time to adjust to controls before throwing you to the horde.

Once you upgrade your bike a bit the world opens up. With a larger gas tank you can now ride further out and begin tackling enemy-controlled areas of the map. Upon entering a new area you’ll find ambush camps filled with bandits, Freaker infestation zones, infected bird nests and, later on, the intimidating and spectacular Freaker hordes. Neutralising these threats is extremely satisfying. It’s easy to get lost in watching the glowing red areas shrink down and enemy camps be replaced with much friendlier safe houses and fast travel points.

By following the main storyline Days Gone reveals a number of flashbacks to Deacon’s relationship with Sarah before the outbreak. They’re largely cutscenes interspersed with short walking sections as the couple discuss various topics and their opposing views on almost everything. Deacon is a biker and Sarah is a scientist, they aren’t exactly star-crossed lovers but it is enjoyable to watch their relationship unfold. As is our protagonist becoming a softer, more caring person thanks to his wife, even if it doesn’t last. Unfortunately, what starts as a story of loss, interpreted with touching flashbacks to a better time turns into a cookie-cutter, defeat the ‘big bad’ plot. Days Gone could’ve been a beautiful exploration of loss, guilt, acceptance and the search for inner peace in a world gone mad. Instead the main story travels down a very formulaic route, it remains enjoyable but it’s nothing special.

The Zombie is in the Detail

What makes this plot change stranger still is that the side stories you encounter, of which there are several, have much more variety and I found myself pursuing these threads much more intently than the main plot. You’ll find a NERO helicopter as you explore the map, this is the company that has been fighting the Freaker infection. These missions involve spying on NERO scientists and consist of insta-fail stealth sections. Although frustrating, the conversations you overhear are legitimately interesting and answer questions that other zombie fiction often neglects.

Littered throughout the open world are small towns filled with derelict buildings, each one is a joy to explore. You’ll find the usual resources, but you’ll also see little details that conjure images of how the widespread outbreak affected everyone. From hastily emptied wardrobes and broken down doors to full suitcases left in the street and piles of burnt bodies in mass graves.

The tunnels in Days Gone also help paint a picture of everything going wrong, they’re dark, eeire and beautifully terrifying to enter. The engine of your bike echoes down these narrow deathtraps while the headlight picks up every little gory detail. You’ll always find a roadblock and be force to get off your bike and find a way to clear the path. Thankfully once you move whatever is in the way it doesn’t inexplicably reappear later... if it does, someone put it there and you’re about to be ambushed.

Abandoned NERO medical and research sites are also great fun to explore. They contain more small details, including recorders that play snippets of scenes - a scientist studying a Freaker specimen; the moment a camp got overrun; or just idle chatter between soldiers. There are three main highlights of Days Gone - the motorbike, the open world map and, of course, the Freaker hordes.

That first horde mission is exhilarating! Running around, using tight spaces and Molotov Cocktails to keep the horde off you, and eliminating literally hundreds of Freakers. It is a well-earned victory. The hordes are wonderfully exhausting to deal with and they require a decent amount of planning . You’ll scout for choke points, explosive barrels and prepare accordingly. After each one you’ll have to stop, loot and rebuild your stockpile ready for the next - it’s fantastic. So it’s odd that they’re entirely optional and there isn’t a trophy linked to clearing them all. Speaking of which...

By the Numbers, People

The trophy list for Days Gone is not difficult, save for a couple of motorbike tricks and the usual collectables. They are all linked to general game progression. You’ll need to stray off the beaten path a little. You’ll be doing that anyway if you want to max out your bike and Deacon himself. Due to my preference for the side stories over the main one I only needed one trophy after the credits rolled. One for unlocking 45 skills, which I got while fighting the hordes. It took roughly 25-30 hours for me to platinum the game.

I did everything in Days Gone and had a great time do it. Burned every Freaker nest; Cleared every ambush camp; Maxed out my wonderful bike; I took on every horde and came out a blood-soaked victor. I had hoped for an impactful conclusion to the main story, sadly it didn’t happen. But the level of detail in the world itself is fantastic. The varied side stories are great. The extra scene for 100% completion made me hopeful for a darker, grittier sequel. Days Gone doesn’t push the boundaries of game design, but it’s incredibly fun throughout and is definitely worth your time.