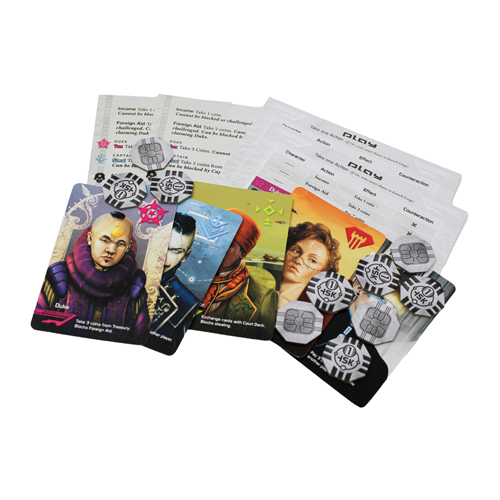 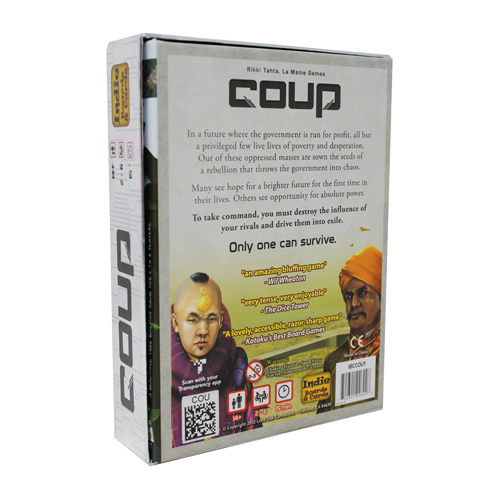 In Coup 2-6 players will be telling as many lies as they can get away with in order to take the reigns of power in a collapsing futuristic government. Released in 2012 by Indie Boards and Cards, this is a must have addition to any gamer who likes bluffing games. Each player is given two face-down roles, which only they know. On your turn your face-down cards will allow you to perfor…
Read More
Category Board Games Tags Best Sellers, Coup, Golden Pear, Indie Board & Cards, Pick Up and Play, Rikki Tahta, Travel, Value For Money, Zatu Gold Award SKU ZBG-IBCCOU1 Availability 3+ in stock
Share
Share this
86%

In Coup, 2-6 players will be telling as many lies as they can get away with in order to take the reigns of power in a collapsing futuristic government. Released in 2012 by Indie Boards and Cards, this is a must-have for any gamer who likes bluffing games.

If you suspect a player to be taking an action for a role they don’t have then you can call their bluff. If you call them out successfully then they will lose a life, however, if you have challenged incorrectly then you lose a life.

Any time a player gathers seven money, they can perform a Coup. This is an action that cannot be stopped and will remove one player's life. Timing when to perform a Coup is key to winning the game.

Most social deduction/hidden role/bluffing games improve when you play a lot with the same player group. Coup is no different. Being able to spot players' tells or habits is very rewarding. Using these tells to your own advantage is even better. If one player is known for using an Assassin early on whenever they have one, then in future games they will be able to pretend to have an Assassin without anyone challenging them.

There is player elimination in this game, but each game is over so quickly that you will not be watching others play for more than a few minutes. You are interested in the information that is yet to be revealed so you'll still be engaged with what’s happening after your elimination.

If you enjoy games like Cockroach Poker and Skull, then Coup will be a great addition to your collection. Learning the different roles and actions can appear daunting. Once you’ve played one 15-minute game with the player aid in front of you you’ll be stealing coins from your friends as if you actually have the cards you’re claiming to have.

In Coup, you start with two influence (people cards) and use your intuition, deduction and bluffing skills to ensure victory by robbing all others of their influence. The game is based in the same universe as The Resistance, a world in the near future where corporations are now the major powers but there’s little crossover bar the art in all honesty.

The game comes with 15 influence cards, a small summary card for each player and some paper coins. All contained in little box, ideal for taking to the coffee shop or pub. Set-up is pretty instant, it's simply a case of shuffling and dealing two cards to each player and giving them two coins.

The aim of Coup is straightforward – to be the last player with a character (or even two) left, but this is not as simple as it sounds. All cards are kept hidden from the other players, so you never quite know what anyone has.

On your turn, you can take one action. There are some actions that anyone can take, and others where you announce which character you have and use their power. The excitement in this came comes from the fact that you do not actually have to own the character you announce.

However. If you are challenged and you cannot reveal the character in question, one of your characters dies. To ensure that challenges aren't made on every single action, if you make a challenge and get it wrong then the person challenging loses one of their characters.

A typical game could contain the following:

The final action not mentioned above is probably the most useful, and the reason why you want to collect coins – a coup. If you have acquired seven coins, you can (and if you have 10 coins, you must) use these to buy a coup and pick a player, who has to kill off one of their characters (their choice if they have two).

So is Coup any good?

Coup is fast paced with turns coming round thick and fast, and with the opportunity to challenge other players, you're always involved in the game. Even if you lose both your characters, games are quick enough that you'll soon be dealt in to another game, and it's actually good fun just to watch.

It will appeal to those who like bluffing and deception, but where this game differs from some of the other similar deception games is that you don't have to lie to win, you can just play the cards you are dealt, which might appeal to those who cannot lie with a straight face!

Coup does have a surprising amount of depth, and several layers of “If he really had that, would he have done that last turn, or was he then bluffing to set this up?” This depth also extends to whether and when to challenge.

As well as gut instinct and other “tells”, there are times in the game where you may be able to figure out that you're going to lose and therefore have nothing to lose by challenging. Likewise, if you figure your opponent to be in that situation you need to ensure you tell the truth to avoid getting caught out.

In summary, if the bluffing element appeals, this is a quick, portable card game that's not expensive and can be played almost anywhere, with anyone and comes highly recommended.