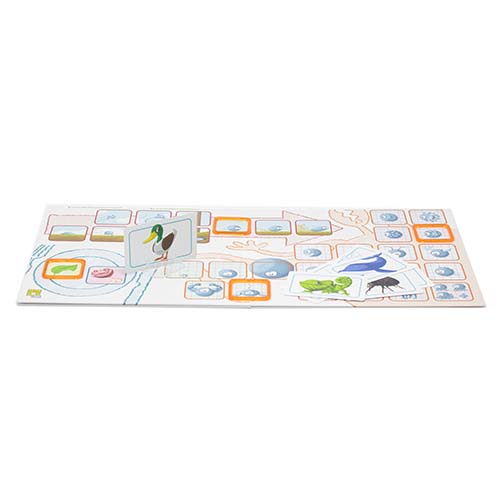 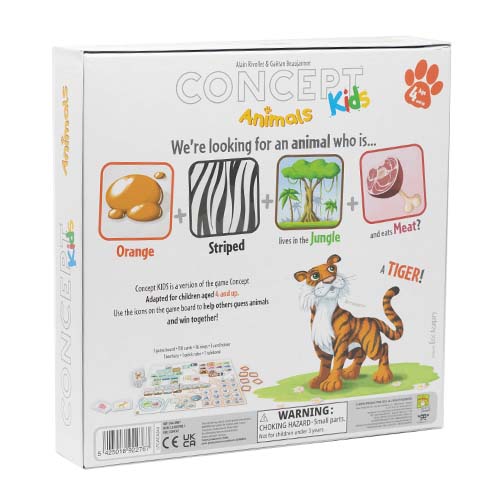 Concept Kids Animals is a cooperative version of the game Concept, adapted for children who don’t yet know how to read. In turn, the children attempt to make the others guess an animal by playing pawns on the illustrated icons on the game board. Through this, the child indicates a feature of the animal to be guessed. Draw 12 cards and attempt to find as many animals as possible in…
Read More
Category Board Games Tags 6-8 Years, 9-11 Years, Asmodee, Concept, Kids Editions SKU ZBG-ASMCONKID-EN01 Availability 3+ in stock
Share
Share this
83%

Concept Kids Animals is a cooperative version of the game Concept, adapted for children who don’t yet know how to read.

In turn, the children attempt to make the others guess an animal by playing pawns on the illustrated icons on the game board. Through this, the child indicates a feature of the animal to be guessed. Draw 12 cards and attempt to find as many animals as possible in order to get the most points together!

Concept Kids Animals offers 110 animals to be guessed, divided into two difficulty levels. Beautifully illustrated by Éric Azagury, this communication game for children will allow them to discover the world of animals in a fun and innovative way.

Concept Kids: Animals is a child friendly version of its bigger brother Concept. It is designed by Gaetan Beaujannot & Alain Rivollet (same designers as Concept) and published by Repos Production. It can play two to twelve players. The basic premise of concept is for a team to work together to guess a specific word or group of words based on icons selected by other members of the team. The board is made up of a multitude of icons and using various pieces players will try and guide their teammates to guess the clue. Concept is a very social game, can withstand a large player count and is very engaging and welcoming for experienced and new gamers alike.

Concept Kids: Animals takes the core foundations and adopts it for a younger audience. In Concept Kids: Animals you have a main board which is divided into various sections such as colour, habitat, how the animal moves, what it eats and distinguishing features (such as number legs, a beak, scales, fair, claws etc). The game also comes with two large decks of animals with different difficulty levels.

At the beginning of the game you draw 12 animal cards and reveal the card to all players apart from one. This player is trying to guess the animal based on the clues given by the other players. The other players will then place pieces on the board that describe the particular animal on the card. Based on the clues given the "guesser" will then attempt to identify the animal depicted on the card.

Players work together to get as many animals correct and score the most points.

I have always had a fun time playing Concept be it with gamers or with non gamers. It is interactive, it is social and it is a great to spend some time with family and friends that doesn't require too much mental capacity.

I love what Concept Kids: Animals is doing here. By reinventing Concept to a younger audience they are providing a learning and development tool for children as well as bringing them into the hobby. Concept Kids can sit alongside its bigger brother on the shelf and to a kid it feels like they have a "grown up" game just like Mummy and Daddy (not my words, but my kids)

At the time of writing this I have two boys, 3 and 5 years old. When I first showed them this game they were very excited and immediately ripped the shrink off and sat. The rules are very simple and very intuitive. Without my explanation they knew exactly what to do and delved straight in. Some of the descriptive icons can be a bit misleading but with a bit of assistance it is easily enough worked through.

On our first sitting we played this about five times back to back. We got to the point where we didn't even count out the recommended number of cards and just kept drawing from the deck. The fact the animals are divided into two difficulty levels is great as you can pick the deck that is best suited to your children. There is also a reference aid showing all the animals to help children identify them. This is a great addition  especially for younger children who might not know the name of the animal but can at least point to it on the player aid.

The game is great as a learning and development tool. It can teach children new vocabulary and help them to understand how to describe things to others. It can also help them to put together clues and come up with an answer based on what is available to them. There is nothing more amazing as Father as seeing my youngest guess Rhino based on just the clue gray and getting it right. Their faces light up with joy when they get it right. Concept Kids: Animals is a fun and interactive game for children. I will leave you with some words from my eldest as he wanted to review the game as well.

"I love using the clues to guess the animals".

If you have children and want a fun, social, quick playing game with minimal setup and easy rules, but is something educational, then you have to check out Concept Kids: Animals. There needs to be more games in this line. This is a win from me and my family.