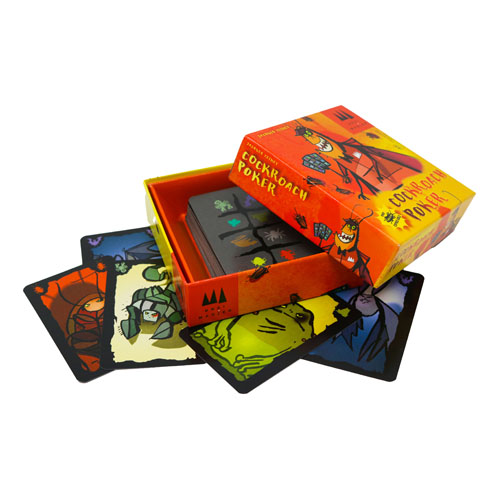 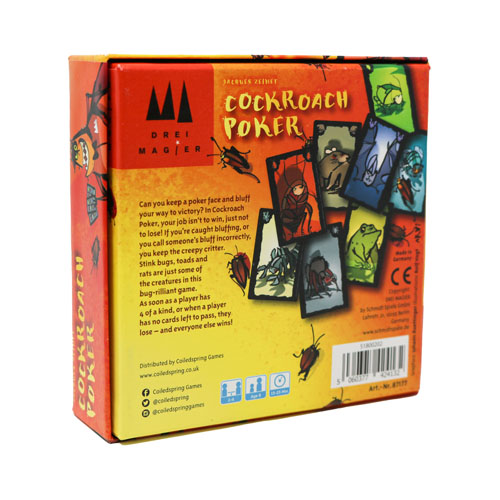 Cockroach Poker is a reverse set collection game that has nothing to do with poker  except that the game is all about bluffing, but with cards that show cockroaches, rats and stink bugs instead of queens, 10s and aces. The goal of the game is to force another player to collect 4 of any one type of critter. The deck includes 64 cards, with eight copies of eight types of critters. T…
Read More
Category Board Games Tags Best Sellers, CoiledSpring, Fun for Kids, Top 20 Party Games, Travel SKU ZCS-COCKROACH Availability 5+ in stock
Share
Share this
75%

Cockroach Poker is a reverse set collection game that has nothing to do with poker  except that the game is all about bluffing, but with cards that show cockroaches, rats and stink bugs instead of queens, 10s and aces. The goal of the game is to force another player to collect 4 of any one type of critter.

The deck includes 64 cards, with eight copies of eight types of critters. To set up the game, shuffle the deck and deal the cards out to players.

On a turn, a player takes one card from his hand, lays it face down on the table, slides it to a player of his choice, and declares a type of critter, e.g., "Stink bug". The player receiving the card either

 Accepts the card, says either "true" or "false", then reveals the card. If this player is wrong in her claim, she keeps the card on the table in front of her face up; if she is right, the player who gave her the card places it face up before him.

 Peeks at the card, then passes it face down to another player, either saying the original type of critter or saying a new type. This new player again has the choice of accepting the card or passing it, unless the card has already been seen by all other players in which case the player must take the first option.

I stare into the eyes of my opponent hoping to exude confidence. My voice strong, I tell them that the card in front of them is a spider. The corner of their mouth briefly turns up into a smile that tells me they know. One word. “Lie” they say, with almost a little pity in their voice. Almost. The card is flipped, and a slimy, somewhat arrogant looking, toad is revealed.

I try a new tactic, I avoid any eye contact whatsoever, grab a card with a small, almost cute, fly on it and tell them that it is a rat. I glimpse up quickly, they shake their head and with great relish “that’s a lie” they blurt out. My tactics may change here and I could target someone else, but I am desperate and I'm obviously being read like a children’s book. Stubbornness sets in.  I assume they are just being lucky and reach for another card. My five-year-old son giggles in delight, he knows, he always knows.

Cockroach Poker is a game that is incredibly simple, but it comes with satisfying depth.

All 64 cards are dealt out to the players and the aim is to bluff your opponents into wrongly ‘guessing’ whether the card you have placed in front of them is what you say it is. If they guess correctly, the card goes face-up in front of you.

There are eight different species, and you want to end up with no more than three of any one species face-up in front of you. If you get a fourth, you lose. And if you run out of cards to play, you lose. Instead of guessing, you can pick up the card look at it and then place it in front of another player, either stating that the card is the same little creature or maybe one of the other seven, bringing additional information or misinformation into the mix.

The depth of the game comes from using the knowledge that you have of the cards in your hand and those that have been placed in front of yourself and others to help you to try and devise whether your opponent is likely to be lying or telling the truth.

Further to this is the ability to use your opponent's face-up cards against them. If they already have three spiders, and you place a card in front of them and tell them it is a spider, they may be far more likely to say true, as the risk is so much greater for them. This can allow you to offload cards which may present a problem for you.

Meanwhile, the other players are using the same knowledge against you. As a result, you can end up having to place cards which will result in defeat. So, who do you put them in front of and what do you say?

In Cockroach Poker there is only a loser, which may create a sense of a lack of conclusion for some. However, for me this is part of the game’s charm. It results in targeting certain people in an attempt to avoid personal disaster and can bring out the right kind of competition and a sense of in game personal battles.

The great joy of Cockroach Poker is learning just how bad you and others can be at bluffing. Another joy is watching people who have thought and overthought their tactics become increasingly desperate. Watching as their opponents continue to either guess correctly or shrewdly discern whether they are lying or not, through their body language, false bravado or shifty eyes.

More than anything Cockroach Poker is just very funny. Watching people being called out by friends, partners or children is funny. This results in a lot of laughter and gentle mockery. Some may want more from the game, as it is , on one level, just a guessing game where you get lucky or not. However, to me there are so many levels that make it so much more.

One minor issue is that whilst there is a lot of interaction, it can be between select people. As a result, you may be left with nothing to do for some turns. However, this is only in larger games Of course, this is offset by watching the drama unfold.

Whilst the components are very simple, just 64 cards made up of eight sets of eight, each card is individual and the artwork (by Rolf Vogt) is charming with a cartoon like quality meaning that I did not feel short changed by the purchase of this deck.

Games can be very quick, lasting 10 to 20 minutes, and can be played in almost any group. It's a game you can play last after a few drinks. Whilst it's also a game to play with children just before bed. The level of complexity is up to the players involved and I have always found it a popular choice.