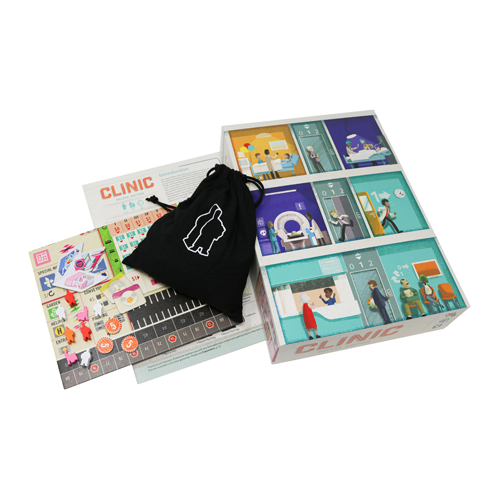 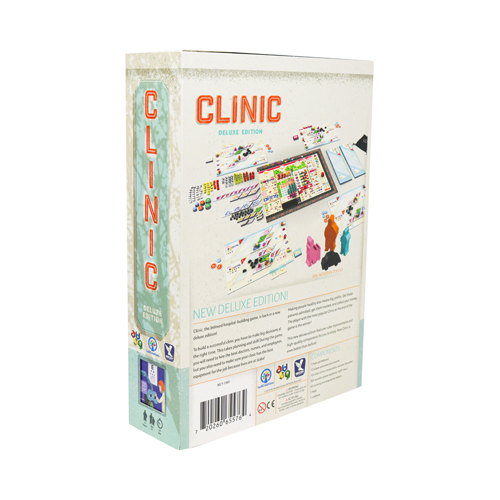 Your Town Center is flourishing, but as the city grows, the need for emergency medical care grows with it. Fortunately, you and your business partners have the wherewithal to build a clinic to help those in need of more than first aid. You quickly get a pre-admissions facility built to help process and route the different cases into the appropriate queues. Unfortunately, just before…
Read More
Category Board Games Tags Alban Viard, Best Sellers, Exceptional Components SKU ZG-AVSGCL001 Availability 2 in stock
Share
Share this

Your Town Center is flourishing, but as the city grows, the need for emergency medical care grows with it. Fortunately, you and your business partners have the wherewithal to build a clinic to help those in need of more than first aid. You quickly get a pre-admissions facility built to help process and route the different cases into the appropriate queues. Unfortunately, just before groundbreaking, your differing views of the ideal clinic cause a schism between you, and you go your separate ways, with patients already lining up in pre-admissions. Each of you decides to build the clinic of your dreams, trying to hire doctors, nurses, and maintenance staff, and build new modules, specialized services, and even parking, in order to meet the needs of the patients ailing in pre-admissions.

This is your Clinic! Build it however you like to give patients the care they need, so you can make your Clinic the most popular one in town!

Possible exhaustive list of differences between the Deluxe edition and previous edition:
- The rules have been totally rewritten
- The rules offer two sets up for beginners and experts
- The rules include a solo variant
- Many bonuses and penalties have been changed such as when a Patient dies in your hospital, the turn order has been updated and clarified
- The box includes a bag of wooden laser cut meeples for the cars, the doctors, the staff and the nurses Unboxing How To Play Unboxing

I grew up in a dark time called the 90s. One of my favourite ways to escape that bleak existence was playing a computer game called Theme Hospital. For those who aren’t aware, it’s a game where you are responsible for building a hospital, staffing it and trying to cure as many patients as you can while trying to best competing hospitals. It’s a theme I really enjoyed but not something I have every really found an analogue for in the cardboard realm. That was until I saw a review of clinic on the “Rahdo runs through” YouTube channel.

It seemed like it would be a great game to try but unfortunately it was an extremely limited production run, less than 50 copies world-wide if my memory serves, so I was unlikely to ever get my hands on a copy. Luckily for me in 2019 Clinic was kickstarted for a wider release as a deluxe edition so I have finally had a chance to play it, the question is, was it worth the wait?

So, clinic is an action selection and building management game where each player is a hospital administrator charged with making the most popular and profitable hospital possible. The game takes place over six rounds where each player gets to take three actions, either build some hospital, hire some staff or admit some patients. Once each player has taken their three actions they have to try and move the patients, doctors, nurses and orderlies to where they are needed as efficiently as possible.

After you have managed to treat your patients, or not as the case may be, you earn some money which you can use to pay your workers and for your hospital upkeep. Any money left over can be either saved to buy more hospital things next turn, or you can use it to buy popularity to help you win the game.

Building your hospital is fun. You’ve got up to five different treatments that your hospital can offer, depending on player count. Each floor of each building in your hospital can only specialise in treating one of these ailments. But in order to treat an illness, you need a treatment hub for that disease type. And that hub needs a treatment room adjacent to it on the same floor for all of your sick patients to go in, and the treatment room needs a supply room adjacent to it on the same floor or directly above or below it.

So, you’ve got an interesting tile puzzle where you have to make sure that each tile has the correct tiles around it and preferably use each of those tiles in as many combinations as possible to maximise on your investment. The layout of these tiles matters as well, as each of your patients and staff members will need to move around your hospital and the longer it takes to move between rooms, the more you will be penalised at the end of the game.

On top of these basic tiles you have a few speciality tiles that will allow you to perform special actions which will help you treat more patients or be more flexible with who can treat them. You’ve also got some lovely gardens which will get you some bonus cash for every patient treated in a room that is adjacent to your beautiful flower beds. You can build extra entrances or even helipads on your hospital to give you a bit more flexibility in how you move everybody around your buildings as well as giving you a bit more of a budget to get the patients you would like.

Also, you can build a conveyor belt system that acts like a network of teleporters to move staff and patients around your hospital in an instant. The last thing you have to manage is your parking. Every staff member and patient comes with a car that you need to find somewhere to park. You can park them between your empty building lots, but that means you can’t use them for building hospital rooms, you could also build a parking lot which allows you to bung a lot of cars on a single space, but that costs money. Choices, choices.

So, you’ve got a nice hospital, you should probably use your hire action to get some staff. There are three flavours of staff you can hire, doctors, nurses and orderlies. Doctors come in four colours; red, orange, yellow and white. These different colours denote which colour of patient they are best suited to treat, with red being the most serious and white being a case of the sniffles. If a doctor’s colour doesn’t exactly match, you’ll need a nurse to make up the difference; one nurse for every difference in level. Orderlies are used to make your hospital more efficient by reducing your upkeep costs and live in your supply rooms.

If things seem ready to roll it is about time to invite the public into your new hospital. Patients come in four colours to match the doctors and can have any one of the diseases you are playing with. Using the admit action you can manipulate where the patients are on the admissions board to switch things around to get the patient you would like to the right place to admit them. Everybody starts with one movement point and you earn an extra point for every entrance or helipad in your hospital. Once you’ve admitted a patient, they move off you your player board, and don’t forget to park their car.

After everybody has done their three actions for the round, the game moves on to the movement phase. The players can now move their staff and patients around their hospital, spending time points for every move they have to make to get them where they need to be.

The last part of a round of clinic is the management phase, where patients get treated, or not, and the hospital upkeep is paid for. More severely ill patients get you more money, but if you fail to treat them, they will die, and you take a reputational hit. Any doctors that treated a patient go down a skill level, any patients left untreated go up an illness level. Any money that you make can be either saved or used to buy a reputation boost. Saving money means you can do more things next round, but a solid reputation is how you win the game.

Soft toys and balloons are available at the gift shop

I had a lot of fun playing clinic. It should be said that so far I’ve only played it solo. The solo mode works pretty much the same as the multiplayer version but with a goal you are trying reach. The game would seem to play pretty similar with more players as the only interactions are really drafting components other players would want or leaving them with the bad stuff. The building puzzle is a lot of fun especially when you start designing multi floor, multi building campuses with a conveyor system to whisk everybody around instantly.

It's very satisfying. The same with manipulating the patient queue, making a few clever switches can get you a gang of patients that you can quickly treat and bank a good reputation jump with some extra cash to boot.

I had a few issues with the rule book and the game setup. The rulebook doesn’t explain what any of the bonus tiles, given to players at the beginning of the game to change up your initial hospital setup, actually do. The rules also mention it is possible to remove cars from your hospital grounds by electing not to pay doctors. But this isn’t mentioned in the upkeep phase of the rules and a quick check on board game geek suggests I’m not the only person having these problems. That said, these are minor hiccups and the game itself is still very enjoyable.

The components are nice on the whole, the wooden pieces look great and the illustrations on all of the building tiles are clear and can be identified at a glance. Some of the money tokens in my copy seem to have been printed off centre, which is a shame but it is hardly game breaking.

Lastly, it is worth mentioning that the deluxe edition of clinic comes with four optional modules that allow you to modify how your game plays. Mainly they just give you a few risk reward choices to make, but the last one turns your game into a bizarre zombie fest with the undead walking the halls of your hospital and more importantly clogging up the car park with abandoned cars. I can’t say I’ll play with them often, but it is nice to have the option to mix things up.