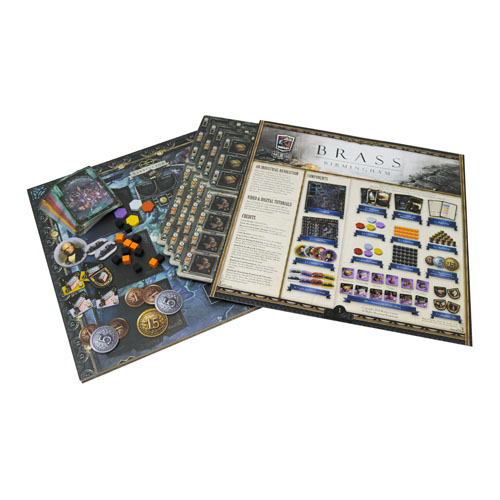 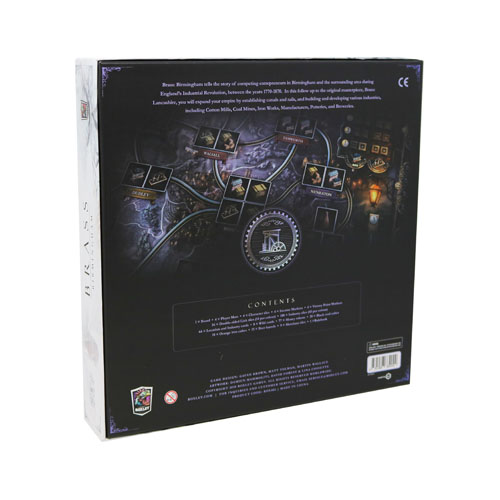 As one of highlight releases in 2018, Brass Birmingham is a master class in economic strategy gaming. As a sequel to Martin Wallace’s original game Brass, this release focuses on the industrial expansion across the midlands of the UK over 100 hundred years up until the end of the 19th Century. The quality of the components in unquestionable and the double-sided board, featuring da…
Read More
Category Board Games Tags Best Sellers, BGG Golden Geek, BGG Top 100, Brass, Golden Pear, Great Gifts, Martin Wallace, Podcast Approved, Roxley, Zatu Platinum Award SKU ZBG-ROX402 Availability 3+ in stock
Share
Share this
92%

As one of highlight releases in 2018, Brass Birmingham is a master class in economic strategy gaming. As a sequel to Martin Wallace’s original game Brass, this release focuses on the industrial expansion across the midlands of the UK over 100 hundred years up until the end of the 19th Century.

The quality of the components in unquestionable and the double-sided board, featuring day and night time alternatives is stunning to look at. Roxley’s Brass Birmingham is a gorgeously historic game that captivates and enthrals gamers looking for an involving dynamic strategy title.

The game is split into two halves, the Canal era and the rail era. This gives the player a chance to evolve their industry and claim victory points at the end of each half. The winner is the player with the most at the end of the second era.

As a sister release to Brass Lancashire, it takes original idea of building Iron, Coal and Cotton industries and also adds Brewing to the mix as beer is needed to move goods across the board. Reacting to the ebb and flow of market demands, players must maintain a close eye on the competition and take advantage of connections where possible. In Brass Birmingham, building new factories increases the network connections between cities to sell their manufactured goods. There are many subtle rule changes between this and the 2007’s Brass, adding new options without impacting on the overall complexity. Possible paths to victory have been tweaked and tactics amended to allow for a completely new experience, even for veteran players.

As a companion to Brass Lancashire it offers a rewarding alternative whilst remaining a familiar journey. Fans of the original are spoilt for choice when it comes to playing these updated modern masterpieces.

In 2007, Martin Wallace created the original version of Brass. Considered a masterpiece by many, it was a game that would go on to become one of the highest ranking games on Board Game Geek. It currently sits in 20th position in the sub category of strategic games.

Fast forward 11 years and Brass has been given a much needed face-lift in an updated version of the game, renamed Brass: Lancashire. The artwork is stunning and the production quality is first class. The same can be said for this, Brass Birmingham, the sequel to Brass which has been released at the same time.

The board sets the atmosphere perfectly, instantly immersing you into the world of the Black Country during the industrial revolution, between the years of 1770-1870. It's in this world where you will compete with the other players to be the most successful entrepreneur. Brass Birmingham is an economic strategy game which rewards careful planning and well thought out moves.

All of the components have been produced with exceptional quality. The player boards and cards are adorned with beautiful art so that they blend perfectly with the main board. The rule book is well written, although it can take some time to get your head around some of the rules concerning networks and links. However, the player aids are very clear and once everything clicks into place, it becomes straightforward to play.

As in its predecessor, you must develop, build, and establish your network and industries in an effort to exploit low or high market demands. Each round, players take perform two of the following actions (found in the original game):

A new sixth action has also been added to Brass Birmingham:

Brass Birmingham adds other elements to the original version of Brass, including the addition of Breweries, Manufacturers, Potteries and larger coal and iron market sizes.

Brewing is one of the most significant additions to Birmingham. You must now sell your product through traders located around the edges of the board. Each of these traders are looking for a specific type of good each game. To sell cotton, pottery, or manufactured goods to these traders, you must also "grease the wheels of industry" by consuming beer.

For example, a level one cotton mill requires one beer to flip. As an incentive to sell early, the first player to sell to a trader receives free beer.

Brass Birmingham is not a light game, rather it’s a must for anyone looking for an intense, brain burning euro. Gameplay requires both strong strategy and flexible tactics to manage competing demands. Interaction between the players comes through competition for the different markets, although this is less than in Lancashire, which has less industries.

The replay-ability of this game is high due to the variable set-up and the opportunity to explore a multitude of possible strategies. It can be a long and arduous experience but one which is ultimately rewarding and leaves you wanting to come back for more!