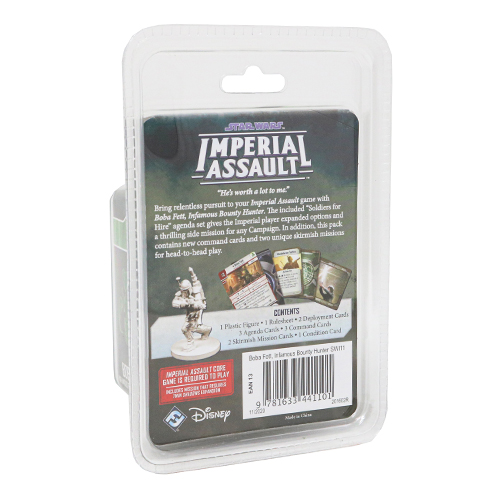 you could earn 1181 victory points

you could earn 1181 victory points

One of the most famous bounty hunters in the galaxy touches down in Star Wars: Imperial Assault! Boba Fett, Infamous Bounty Hunter is here!

Sporting a health of 12 and a speed of Six, Fett is a powerful Mercenary unit. This clone of Mandalorian bounty hunter Jango Fett gives your squad a close-range combatant! The sharpshooter can make his opponents weakened by spending a surge point. This new condition reduces the target’s surges and evades! His Battle Presence ability makes all hostiles suffer a strain point after they exit a space adjacent to Fett. This gives him unparalleled zone control just by using his pressure! His second ability, Battle Discipline, allows him to buff any attack he makes. This can be increasing accuracy, dealing extra damage or healing himself!

Boba Fett’s greatest part is in the Twin Shadows mini-campaign, but he can be used anywhere. The Agenda set Soldiers for Hire allows the Imperial player to use him for the rest of the campaign. By Any Means Necessary allows a mercenary figure to attack twice, at cost to their own life.

There are also options to buff your skirmish deck! Explosive Armaments allows you to deal a huge amount of damage. Two surge points can be expended for extra damage and an Area of Effect strike! Capture the Weary either makes an opponent Weakened, or deals two Strain points. Jump Jets allows you to move a figure anywhere within 5 spaces! Finally, Mandalorian Tactics lets Fett attack twice and choose all 3 abilities of Battle Discipline!

This bounty hunter comes at a high price on the Outer Rim, but his clients say he’s worth it. At least, before their opponent hires him too. Add Boba Fett to your forces today!