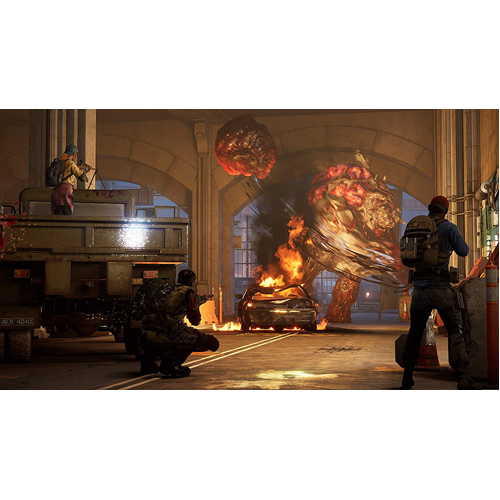 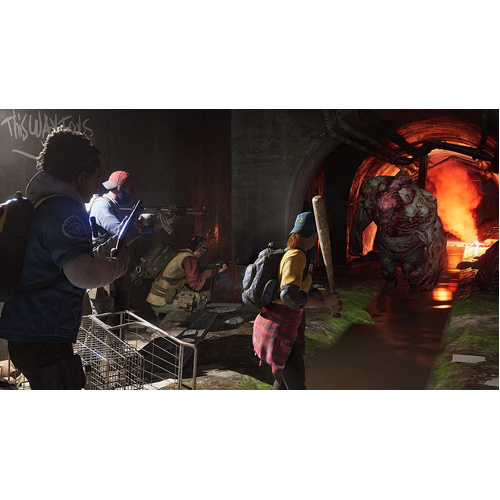 Pay in 3 interest-free payments on eligible purchases. Learn more
Success! We will let you know when this product is available again.
Your email address has been unsubscribed!
Your email address has been unsubscribed!
Notify me when this product is available to purchase!
This email address is already subscribed to this product!
You are at the centre of a war against the ridden. These once-human hosts of a deadly parasite have turned into terrifying creatures bent on devouring what remains of civilization. With humanity’s extinction on the line, it’s up to you and your friends to take the fight to the enemy, eradicate the ridden, and reclaim the world. Fight your way through a 4-player co-op story campa…
Read More
Category Video Games Tags Back 4 Blood Video Games, PS5, Software SKU VCS-P5REARWAR22751 Availability Out of stock
Share
Share this
90%

You are at the centre of a war against the ridden. These once-human hosts of a deadly parasite have turned into terrifying creatures bent on devouring what remains of civilization. With humanity’s extinction on the line, it’s up to you and your friends to take the fight to the enemy, eradicate the ridden, and reclaim the world.

Fight your way through a 4-player co-op story campaign where you must work together to survive increasingly challenging missions. Play with up to 3 of your friends online or go solo and lead your team in battle. Choose from 8 customizable cleaners and a range of lethal weapons and items to strategize against an ever-evolving enemy.

Play with or against friends in pvp. Become a cleaner or switch sides and play as the horrific ridden. Both sides come with unique weapons, abilities and perks.

I think there is a plot and a narrative in Back 4 Blood. I have picked up we are survivors, and in fact more than that, we are Cleaners, elite ridden (zombie) hunters who seem to go out to help cleanse the world and rescue unfortunates. There might be some rationale about why there has been a zombie apocalypse. Something to do with an alien worm, maybe. But that pretty much tells you how much the plot stuck… or for that much, how much I cared.

But don't for one moment think this is the direction of where this review is going. B4B is one of the best games I have played this year (it has pulled me away from Apex - which is quite a feat). It is a glorious co-op zombie shooter and it not only invokes the nostalgia or its spiritual predecessor,  the 2008 release Left 4 Dead but stands on its own two feet as a top-class game for 2021.

Bang, Bang... I Shot Them Down

First and foremost the gunplay in Back 4 Blood is excellent. There's a satisfying range to choose from:  pistols, SMGs, ARs, snipers shotguns and LMGs. Each category has at least 4 models, and they all feel slightly different as well as having different stats. Along the way, you will customise your load-out with up to four attachments for weapons: barrel, mag, stock and sight which will further modify stats and feel.

I have seen critique that the in-game shop is too random and this is a frustration, but as a BR Apex player finding pleasure from making do with what is available is my jam. Most importantly, whatever you have will be solid and hefty as you fire into wave after wave of ridden. And the melee is strong too - it's not Chivalry 2 but then this isn't a dedicated melee experience. There's only one type of hit per weapon, but again it's chunky and satisfying.

Player movement is a minor gripe. Walking about, it feels a bit like you are floating at ground level and there is no movement sway or feeling of feet hitting the ground. Running is better but still, the player movement is functional if a bit superficial. I am aware my barometer may be off a bit as I am an Apex player and that sets a gold standard, but still, movement does contrast with gunplay in the quality of the feel.

However, I am definitely a fan of the different characters in the game - 7 in total: 4 starters and then 3 which seemed to unlock without me having to think about it. All have their own special ability, starting load-out and fabulous, which genuinely makes me chuckle as the glib and dark banter between the party of four plays out across the campaign. The special ability tends to push you towards a kind of class choice: melee, ranged, support and healing. However it's only a start point and instead of a character-specific skill tree instead, you all get access to the deck building system. There's real flexibility in the gameplay.

The deck-building system I initially thought was a gimmick but as I played more and understood it better it became clear how smart and satisfying it was. When playing co-op multiplayer you earn supply points which you can use to unlock progression tracks (in essence a rework of a skill tree system). The stages of the tracks give you access to cards (and cosmetics) and the cards you can build into a series of custom decks. Why I hear you ask? Well, each card offers a buff to certain stats or a bonus to certain combat effects (like melee, or precision shots).

At the beginning of a campaign, you choose a deck as well as a character. At every stage of the campaign, you are dealt another card from your deck. This card crucially isn't shuffled and remains in the order you predetermined. And once you have chosen a card that stays with you for the duration of the run, so ordering what you access when is crucial.

On the one hand, this provides character progression and buffs you (and with some cards the party) as you progress through the game and things get harder. But there's a meta to this progression too, which makes the game somewhat akin to a roguelike. As you hit later stages or harder difficulty levels you will die (a lot), but you are always earning supply point.

Children of the Corn

While I didn't give two hoots for the plot of Back 4 Blood, the theme and level design for a game like this are hugely important. In Back 4 Blood, they are super strong. I loved defending the diner as the jukebox blared heavy metal. The tension of stalking through a cornfield in the mist, and a shoot out on a boat as we tried to get a helicopter to collect some crates, defending them from waves of ridden. The list goes on, playing heavily on horror tropes, but doing so with craft, creativity and evocative atmosphere. Top marks in this area.

Now it's all well and good having great maps but all is for nothing if you can't get to play them. Fortunately, no worries there as waiting for a server is rarely a chore. If you want to play PvE and are happy to help someone else rather than worry about your level progression there is really no wait for a quick match. Getting others to join you can have a minor wait but rarely more. Crossplay works well and you can friend players from other platforms - though it's too easy to accidentally unfriend them.

And if you want to play solo you can with some generally effective and helpful bots. Occasionally they get trapped, but normally this is for a few seconds; the rest of the time they are effective and even downright helpful, deploying occasional heals and dropping ammo which is a real boon. In fact, the ammo drop is so helpful. If you get multiplayer with one bot and two real folks it makes it demonstrably easier - to the extent that it's a bit of a downer if a fourth player jumps in and boots the bot.

As for other modes, the solo I have mentioned and is good fun. However, you don't earn supply points. You instead get access to all the cards in the card library with no need to unlock. And then there is also a PvP 4v4 which is fun for a bit, as a team of riven face off against another team of cleaners but loses its lustre due to some balance issues. That said the multiplayer PvE is so strong I am not too fussed about other modes having their wrinkles.

Overall Back 4 Blood is an absolutely smashing game. A tense, atmospheric and satisfying co-op shooter with some great gunplay, satisfying progression and elegant level design. It's a marvellous mash-up of the old L4D with a new roguelike feel. Any grumbles pale into insignificance as you wade through waves of riven AK in hand, strangers thrown together and forged into an inseparable team out there saving humanity.