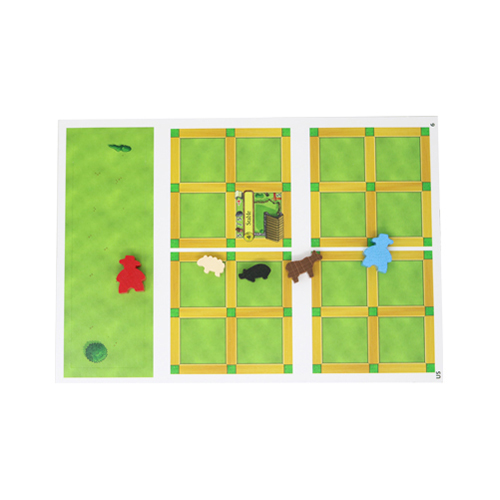 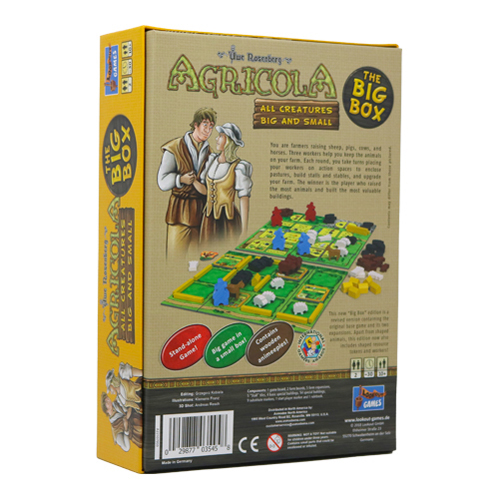 Agricola: All Creatures Big and Small – The Big Box

Agricola: All Creatures Big and Small – The Big Box contains the Agricola: All Creatures Big and Small base game and everything from the two previously released expansions. In the game you become an animal breeder and have to breed horses, pigs, cows and sheep, and try to make the most of one’s enclosures. Players start with a 3×2 playing board that can be expanded d…
Read More
Category Board Games Tags Agricola, Best Sellers, Mayfair Games, Zatu Gold Award SKU ZBG-MFG3545 Availability 3+ in stock
Share
Share this
87%

Agricola: All Creatures Big and Small is a new take on Agricola designed for exactly two players and focused only on the animal husbandry aspect of that game. So long plows and veggies!

In Agricola: All Creatures Big and Small, you become an animal breeder of horses, cows, sheep and pigs and try to make the most of your pastures. Players start with a 3x2 game board that can be expanded during play to give more room for players to grow and animals to run free. Sixteen possible actions are available for players to take, with each player taking three actions total in each of the eight rounds.

The player who amasses the most victory points through enclosing space with fences and acquiring the largest number and variety of animals and victory point-generating buildings will be the winner.

Four Standard Buildings and 4 special buildings are available in the base game. These buildings each provide unique special abilities during play and/or VP at game end. Balancing the tension between building infrastructure (fenced pastures and buildings) and acquiring animals (the single biggest source of end-game scoring) is the key to success!

Board games are in a 'golden age' - or so we are told - and it seems to be true! A quick look at the upcoming releases at Essen or the games on Kickstarter and it's easy to be overwhelmed. With so many games out there it's exciting to see new themes explored.

Of course, for every new theme there is another zombie, pirate or viking game. Fair play, theses are fairly cool themes to explore. What isn't that cool a theme, unless you are designer Uwe Rosenberg, is farming. Yet Rosenberg returns to it, or variations on it, time and time again from Agricola, to Caverna, to fish farming in Nusfjord, he loves his animals and food. Agricola: All Creatures Big and Small shrinks the worker placement game into a tight two-player experience and this new big box edition includes all previous expansions.

Arguably, one of the most infamous elements was having to feed your workers. Not feeding that resulted in heavy penalties. Caverna softened the system a bit but kept it in the game. All Creatures Big and Small does away with it completely. While this may put some off the reason is quite clear. This is a streamlined shorter game of rearing animals and fencing them in efficiently, to have to worry about feeding on top of this would be a touch to much.

Each player starts with three workers, which they will place on certain sections of the board to take the action associated with that section. Usually, this is collecting resources which can then be used to upgrade your farm with buildings, fences, stalls and the like. These are all important but the real key to big scores are animals. For a start you score negative points unless you get three of each of the four animal types. But animals won't stay in an open field - why would they? So using your gathered resources you will place out buildings and fences to contain them.

Many buildings can hold animals, but there are strict rules regarding how many animals can stay in an area but this can be increased by various means. In the big box there are so many buildings included due to the expansions, so the variety is incredible. I believe the vanilla All Creatures Big and Small was criticised until the expansions arrived, so it's great to have them in one box.

All Creatures Big and Small is a worker placement game but also a risk and reward race of sorts. A number of the resource and animal sections of the board continue to have resources added to them each round. This means that if no one visits a space with three wood in the first round, another three will be added on the next round and so on. So, how tempting does the pile have to get before one of you takes it? Or should you take it early to be safe? I love these kind of decisions in games and it works even better in a two-player game as there's more chance something will be left for you if you wait.

When you take the action to get more fences you also get a farm extension of three more fields. Extensions are great ways of scoring more points as if you fill one you earn four points. Might not seem like much but in All Creatures Big and Small it can be HUGE!

The variety in the game is excellent! There are tons of buildings and in the base and advanced variant you only use eight, you can add to this for an even more advanced game, but the rule and I recommend waiting until you get the flow of the game until you add more buildings. Buildings are essentially powers, often adding points, animal storage or some other useful function to your farm, thankfully there is a handy appendix in the rules so you can check what they do.

My biggest complaint is a printing error using the older icons on one of the starting buildings. This is unfortunate as this tile is used every game, and while not a huge deal it is aesthetically disappointing. Some people point out the the wooden cows and horses are very similar in colour and in anything less than piercing white light it can be difficult to tell them apart. For me this hasn't really been an issue but I can see how they could be confused.

All Creatures Big and Small

At this point I have played All Creatures Big and Small more than I have played Agricola, not because it is a better game but because it is drastically shorter and more straight forward. It doesn't really feel like 'mini Agricola' as a lot has been stripped back, but it maintains enough to be recognised as a relative and one that you can see the family resemblance in.

Because of this, All Creatures Big and Small is a great game to teach worker placement, as a two-player game it is a perfect teach, plays short enough to have a learning game followed by a proper game, and could be a good gateway to heavier worker placement games. It will not replace Agricola, but it will give you a satisfying quicker experience.

Bottom Line: All Creatures Big and Small provides a tight, engaging and quick take on worker placement and farming. Taking out the most punishing aspects of it's forbearer and focusing in the experience, while also providing huge replay-ability.

Nick can also be found at Board, Deck & Dice.