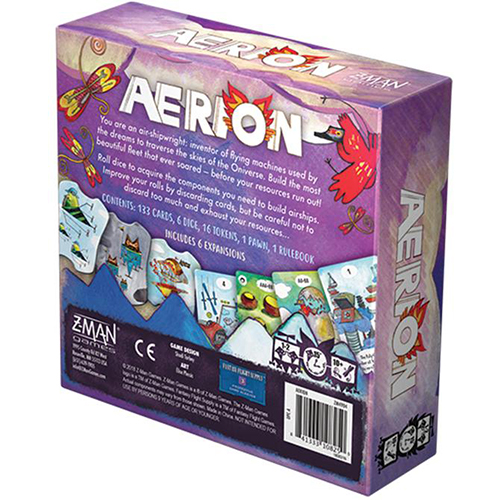 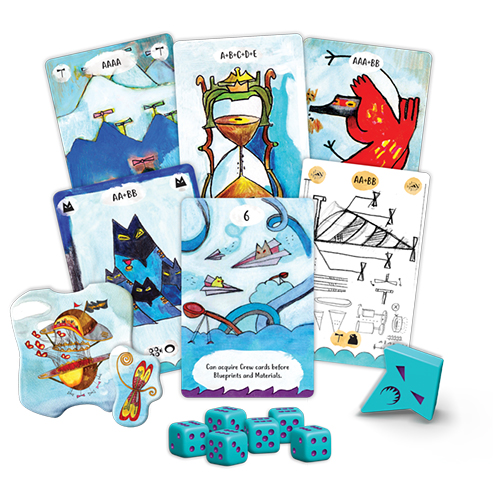 you could earn 1945 victory points

you could earn 1945 victory points

You are an air-shipwright, that is, an inventor of flying machines used by the dreams to traverse the skies of the Oniverse. You have been challenged to build a new fleet, the most beautiful ever seen. Now you must roll the dice to acquire the components you need to build airships. In Aerion, a solo/co-operative game for 1-2 players, you must find the best blueprints, acquire the fi…
Read More
Category Board Games Tags Golden Pear, Oniverse, Shadi Torbey, Travel, Z-Man Games SKU ZBG-ZMG4904 Availability Restock Expected
Share
Share this
88%

You are an air-shipwright, that is, an inventor of flying machines used by the dreams to traverse the skies of the Oniverse. You have been challenged to build a new fleet, the most beautiful ever seen. Now you must roll the dice to acquire the components you need to build airships.

In Aerion, a solo/co-operative game for 1-2 players, you must find the best blueprints, acquire the finest construction materials, and recruit the best crew. Discarding cards can adjust your die rolls, but be careful not to exhaust your resources! Can you build the best fleet?

Shadi Torbey has carved out somewhat of a cult following with his Oniverse games, creating a universe of small box solo games (there are two-player co-op instructions too) linked by a kooky art style and populated with strange creatures. It’s a world that I have loved returning to – fighting epic forest battles (Sylvion), exploring a dream labyrinth (Onirim) and taking part in thrilling sea races and battles (Nautilion). So, I was more than a little excited to open the box on the latest chapter in the series: Aerion.

In Aerion you play the role of a shipwright who must build an impressive fleet of six different airships ordered by the Archonts. Each ship requires a different combination of blueprint, building material and crew. These resources are represented by cards that you must acquire by rolling the correct combination of dice to purchase them from the display of six available resources, but there is a snag; if you don’t have the correct combination to get the resource you want, you must discard a resource to reroll. With only eight cards in each resource deck this means time and resources can run out quickly and each deck can only offer certain types of resource.

Adding to your difficulties is the fact that you only have two workshops. This means you can only be working on two ships at any time. It’s very easy to start a project, only to find the necessary resources don’t appear in the display as you’d like. On top of this, crew cards must be added last, so sequencing your plans and trying not to waste rolls and resources is essential. Sacrificing cards to get the right card at the right time might be necessary.

It’s not all doom. To help you achieve your goal you have three pixies. One time use tokens that enable you to change one die to any result per token. You can also acquire book cards that will enable you to have free rerolls, acquire cards into a special reserve pile or rescue resources from the discard piles.

To win the game, you need to build all six ships before the resource decks run out. This can feel pretty simple at the start when there are lots of options, but, as you build each ship and require more specific resources from dwindling or exhausted decks, your options can feel pretty limited. Even successful games often end with you blowing luck on a last roll of the die!

As with all of the Z-Man editions of Oniverse games, expansions come in the box. On top of the base game there are six expansions included. Some just increase the difficulty (Flagship, Hourglasses), while others change the game enough to give it a completely different strategy and feel (Piers, Hellkite). While the instructions say you can combine the different expansions, I would recommend only adding one at a time. All are worth a go once you are familiar with the base game, though you may like some more than others. I personally prefer the Stone Clouds and the Hellkite.

For Oniverse fans, Shadi Torbey once again delivers a game that is distinctly part of the universe, but different enough to not feel repetitive. I have enjoyed seeing him progress through different mechanisms and here he takes the dice rolling of the previous instalment (Nautilion) and drops it into a solo Yahtzee-like mechanic that works well.

To be clear, there is more depth and strategy here than a simple Yahtzee game though. Deciding when to discard, reroll, acquire and manage the resources from different decks, leads to plentiful and interesting choices. Those choices also lift the game from being a slave to the luck of its card draw and dice roll mechanisms, keeping you an active participant in the game as you choose the best way to mitigate a bad roll or change direction according to the cards available in the display.

Because of this, this is one of my favourite entries into the Oniverse series. It’s certainly one that rewards repeated plays more and the generous expansions included in the box have greater distinction in how they change the game than in previous games in the saga. I have definitely returned to this game more than say Nautilion or Castellion (both still great games) and would put it up there with Onirim and Sylvion as one of my go-to solo game experiences.

That’s not to say you need to be au-fait with the previous games in the series or have played them to enjoy this. Part of the appeal of the series is the individuality of its titles. In fact, this game might even be a good entry point or stand-alone purchase. If you like a good puzzle, tactical play balanced with a bit of luck and chucking some dice, then you could do no worse than add Aerion to your collection.