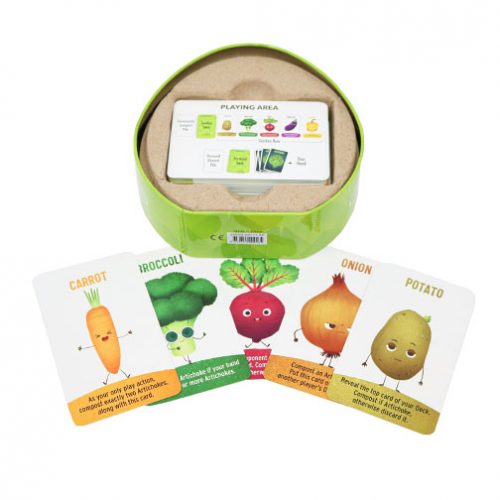 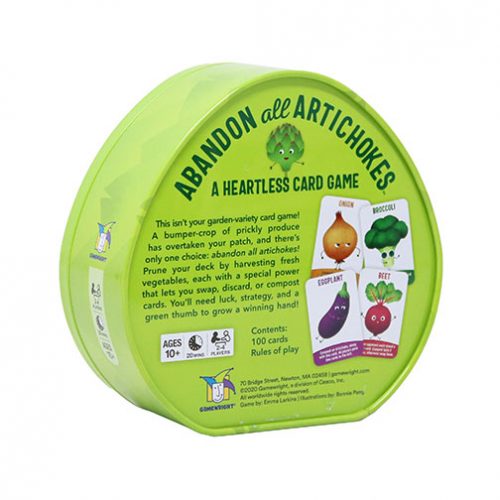 Abandon All Artichokes isn’t your garden-variety card game! A bumper-crop of prickly produce has overtaken your patch, and there’s only one choice: abandon all artichokes! Prune your deck by harvesting fresh vegetables, each with a special power that lets you swap, discard, or compost cards.
Read More
Category Board Games Tags 9-11 Years, Best Sellers, Card Game, Family, Gamewright, Party SKU TCS-ARTICHOKE Availability 3+ in stock
Share
Share this
78%

Abandon All Artichokes isn't your garden-variety card game! A bumper-crop of prickly produce has overtaken your patch, and there's only one choice: abandon all artichokes! Prune your deck by harvesting fresh vegetables, each with a special power that lets you swap, discard, or compost cards.

Have you ever wanted to use colourful, funny-faced vegetables to destroy a load of friendly-looking artichokes? If you have, then Abandon All Artichokes by Gamewright is perfect for you!

This cute little card game for 2-4 players comes in a small artichoke-shaped tin making it great for taking away on holidays or visits to friends. The object of the game is to get rid of your hand of artichokes. You achieve this by either collecting loads of other little vegetables or sending your artichokes to the compost heap (or other players). In order to win the game, you have to do both. This makes it a part deck-builder and part deck-destroyer. The first person to finish their turn by drawing only non-artichoke cards wins the game.

Abandon All Artichokes is a sweet little card game with vibrant artwork. From the adorable little baby peas to the grumpy onion or the eggplant who looks like it just slipped into a warm, relaxing bath, you can't help but be entertained and enchanted by the characters of this game. Even the artichokes have a variety of different facial expressions. Though this can make it a bit sad to see them sent to the compost heap.

Each of the vegetable characters has a different special ability allowing you to ditch artichokes, sabotage someone else or gain even more vegetables. After playing a few games, I have already developed some clear favourites. I love the sass of those onions…

Each player begins the game with 10 artichoke cards. 5 artichokes will be in their hand and 5 will make up their personal deck. All non-artichoke cards are then shuffled and placed in the centre of the table as a communal Garden Stack. The top 5 cards of this stack are revealed in a line named the Garden Row. These visible cards are the vegetables which are currently available for harvesting by the players. Beside this area, you need to set aside a spot for the Compost Pile which will, hopefully, be the final destination for your artichokes. (This layout would be ideal for a colourful playmat!) It's now time to Abandon All Artichokes!

Each player takes their turn in order, starting with whoever most recently ate cooked veggies, and each turn consists of 5 sections. On your turn, you first ensure that the Garden Row is showing 5 happy little vegetables. If it isn't, you add cards from the Garden Stack until it does. Next, you select one of these lucky vegetables to join your hand. Choose wisely! Then you can play as many cards from your hand as you wish (or are able) to play.

Each vegetable card has specific requirements so you must read the text on each vegetable carefully. For example, in order to play the sweetcorn, you must also have an artichoke in your hand at the same time which you play alongside the corn. In order to play broccoli, you must have 3 or more artichokes in your hand. Once you have played all the cards you wish to from your hand, you discard the rest into your personal discard pile and draw back up to 5 from your personal deck. If, at this point, you draw 5 non-artichoke cards, you win!!

Who Should Play This?

Abandon All Artichokes is a fairly simple and short game which could be enjoyed by adults or children. While the random assortment of vegetables available to harvest adds an element of luck to the game, there is certainly also room for some strategy.

If you get too carried away in discarding all your artichokes early on, you will be left with a very small hand which is guaranteed to contain at least one dreaded artichoke. However, if you spend too much energy harvesting new vegetables and not enough time composting artichokes, you will end up with a large deck needing a lot of artichoke pruning.

There is also strategy involved in knowing which vegetables to harvest or play at various points throughout the game. You will want to use carrots and broccoli early in the game. Your potato ally will be more effective earlier in the game but could still be handy later on. However, peas and pepper are wonderful friends to have at any time. Experimenting with different strategies and vegetables gives Abandon All Artichokes a decent amount of replayability but is simple enough to be suitable for people of all ages or abilities.

Abandon All Artichokes was an accidental find for me. I found it one day laying around in my local favourite game shop and the tin was so enticing that I decided to give it a go. Having a selection of small table games is appealing to me, for when I don't have the energy for a large board game or for when I want to play with friends/family who don't like large-scale board games. I had no idea what to expect from Abandon All Artichokes but as soon as I started flicking through the cards looking at the artwork, I was hooked.

My first game took a while as we all had to refer to the player reference guide a lot, but once we got the hang of it, games can be remarkably quick. I vividly remember playing one game which lasted about 20 minutes and the following game being over in 5 minutes (I say it was luck, my brother said it was his skill…). But regardless of who wins, I have been repeatedly enchanted by the little faces on the vegetables and the little attitudes they all seem to convey.

I like Abandon All Artichokes as a starter or finishing game on a game night or just a short little game at lunchtime. A forewarning though- 'artichokes' can get increasingly difficult to say as you get more and more wound up by pesky leeks stealing your good cards. I have certainly come out with Arctic-chokes more than once. Luckily, no vegetables were harmed in the making of this review.