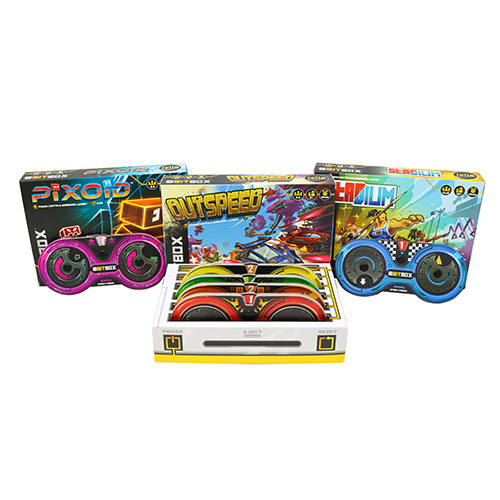 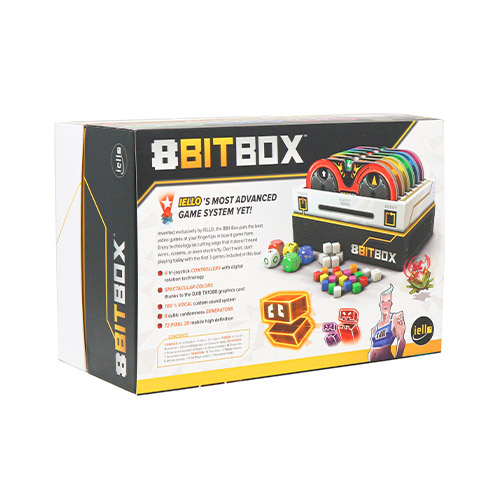 you could earn 1469 victory points

you could earn 1469 victory points

8Bit Box is a board game that will remind you the golden age of video games as each player has a gamepad to program their actions, using three wheels: direction, symbol, and value. The base game contains three different games influenced by classic old-school video games.
Read More
Category Board Games Tags 9-11 Years, Sale SKU ZBG-8BIT Availability 3+ in stock
Share
Share this
82%

8Bit Box is a board game that will remind you the golden age of video games as each player has a gamepad to program their actions, using three wheels: direction, symbol, and value.

Unfortunately, I am a little too young to remember the days of the 8 Bit games, more commonly referred to as the NES. Interesting fact, 8 Bit refers to the processor chip used within the system, Nintendo opting for an 8 Bit chip in their renowned NES console. Games such as Super Mario Bros, Metroid and The Legend of Zelda made 8 Bit gaming a massive part of pop culture today.

Iello seem to have capitalised onto this nugget of popular culture by announcing and releasing a brand new board game, 8Bit Box. This game promises to launch players back to the days of the classic consoles. The board game itself is even made to resemble one of these famous 8-bit consoles and has themed itself to coincide with this era perfectly.

I first got to check this game out at Tabletop Gaming Live. Iello invited me to take a look at their highly-anticipated Essen release and my first thoughts were positive. In the box, you don’t just get one game; you in fact get three very different “mini-games”, each one resembling games from years gone by.

Pixoid, the first game offered, pays homage to everyone’s favourite yellow puck-shaped character! In Pixoid, one player takes on the role of Pixoid, their task to evade the “bugs” for as long as possible while collecting as many points as they can, the “bugs” being played by the other players. A simple, fun to play game that can get quite tense!

The second offering is Outspeed, a game that will remind many of the game Wipeout. Each player takes control of a ship and has to guide it to the finish line. A card is drawn each turn with different routes that players can take displayed on it and this can either fling players further forward or find players getting friendly with a large rock! Players must manage their fuel and make decisions wisely in order to win!

The final game included is “Stadium”. This game is very reminiscent of the game “Mario and Sonic at the Olympic Games”, players splitting into two teams and controlling an athlete competing in various different events. Each player must ensure they preserve their athlete’s energy while also trying to dominate in each race to be crowned victorious and receive the most medals to guide their team to victory. This game will encourage players to be strategic and plan their next moves wisely in order to beat the other team.

How does it work?

So, how do you play these games I hear you ask? Do you use dice? Cards? No, you in fact use controllers. These controllers are modelled on the SNES controllers and have three selection wheels, two on the sides for selecting direction and/or which route to take while the third wheel is numbered, allowing players to select how many spaces forward to go etc. These controllers not only add to the theme of this game but work fantastically well, players being able to secretly choose their next moves while integrating well with the game as a whole!

So, what are my thoughts on 8Bit Box? I think the first thing that must be said is that the theme is second to none! Iello have tried hard to ensure that each element of the game is exactly how you would expect the “video game” counter-part to look, everything from the box itself looking like a console to the boxes of each “mini-game” looking like the classic cartridges that were used with the NES. A lot of effort has been put into the design and it is safe to say this work has paid off and what you get for your money is a well-designed, high quality game!

One wish I have is that this amount of effort had also been put into the instruction manual for the game. Unfortunately, the rule book is somewhat lacking in terms of quality. I found myself having to read over and over again points on each game to fully understand how to play! In a rule book, I expect to see an easy-to-read document that leads onto each point, meaning little time is needed having to scan through looking for particular rules. The rule book for 8Bit Box is not unreadable, there are far worse rule books out there, don’t get me wrong! I just feel for a game where so much effort has been put into the design, you would hope for this to be replicated throughout, including the rule book.

Having said that however, that was my only real gripe about this game! Each “mini-game” plays incredibly well, having been planned and thought out thoroughly not just to see if it works well, but also to incorporate that fantastic theme. All the games played differently which is great, meaning you will get a nice variety with this core box. They have promised new games to be released as well throughout next year that will give players a two-player specific game (of the base games, only one plays as a two-player game and it isn’t the best) as well as lots of other games similar to their 8-bit counterparts.

Iello have been really intuitive with this game, producing not only a great selection of games, but also a model that is scalable, the controllers and game pieces having the ability to be used across all the games. I look forward to trying these new games out and seeing what else they have to offer for this game in the future.

All in all, 8Bit Box has been a fantastic release for Iello, giving gamers something a little different while also sticking to what makes board games so good to play! It was my top Essen release this year and it is safe to say I was not disappointed. This game really gels with me, the classic gaming theme alongside some well thought out games gave me a great experience when first playing and keeps me bringing it back to the table.

The controllers, while simple in premise, add a real value to the game and allow it to be scaled by Iello in the future, something I look forward to. Needless to say, this is one interesting game that really delivers and one that I am sure will impress those who have been board gaming for years, as well as drawing in those who would perhaps normally prefer a video game, but will now have something that incorporates both in perfect harmony. If you haven’t had a chance to try out 8Bit Box, then I suggest you pop it on your wish list right away! You will not be disappointed!