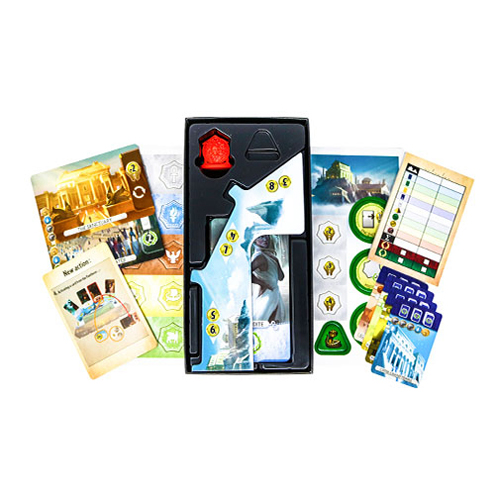 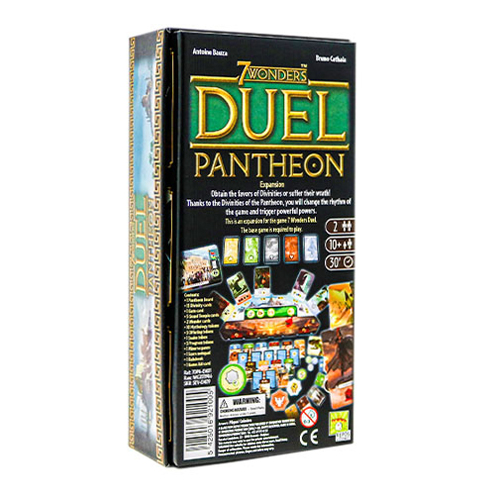 A pantheon from several civilizations — including Greek, Egyptian, and Middle-Eastern — gets added to 7 Wonders Duel in 7 Wonders Duel: Pantheon, with each god having its own power to help you or hinder your opponent. During Age I you collect mythology tokens — which allow you to choose which deities have a place in the Pantheon — and during Age II you collect offering token…
Read More
Category Board Games Tags 7 Wonders, Asmodee, BGG Golden Geek SKU ZBG-ASM7DPA-EN01 Availability 5+ in stock
Share
Share this
90%

A pantheon from several civilizations — including Greek, Egyptian, and Middle-Eastern — gets added to 7 Wonders Duel in 7 Wonders Duel Pantheon, with each god having its own power to help you or hinder your opponent.

During Age I you collect mythology tokens — which allow you to choose which deities have a place in the Pantheon — and during Age II you collect offering tokens, which help you court those deities. Then, during Ages II and III, you can activate a god or goddess in the Pantheon instead of taking a card from the pyramid. To do so, you pay whatever that god or goddess demands from you in offerings, then place it next to your city.

With Isis on your side, you can use a card from the discard pile to construct one of your Wonders for free. Zeus, whose nod determines what happens and what does not, enables you to discard any single card from the card structure that you want, as well as any mythology or offering token that may be on it. The Phoenician goddess Tanit, whose people were renowned for trade, fills your coffers with twelve pieces of gold. Enki, the Sumerian god of crafts, technology, and creation, lets you choose one of two progress tokens. Minerva's ability to stop the conflict pawn from moving toward you can assist with a military victory or save you from military defeat.

What's more, instead of adding three guild cards to the deck for Age III, you add three of five Grand Temples. Each Grand Temple belongs to a different Mediterranean culture, and if you possess a mythology token from that culture, you can build the temple for free. These temples are worth a total of 5, 12, or 21 points, depending on how many you build.

7 Wonders Duel Pantheon also includes two new Wonders: the Sanctuary (which gives you an additional turn and allows you to invoke deities at a reduced price) and the Divine Theater (which grants points and access to additional gods).

7 Wonders Duel is one of the highest-rated two-player games in existence, taking the popular theme and mechanics of 7 Wonders and turning it into a strategic, competitive two-player game. Its first expansion, Pantheon (designed by Antoine Bauza and Bruno Cathala), promises to add intriguing content to revitalise the well-loved game.

We've already published a review for the base game, so this review focuses on Pantheon only. I won't go over the bulk of the original gameplay, focusing instead on how the expansion shakes things up. I'm also going to assume that if you're interested in the expansion, you probably like 7 Wonders Duel, so I'll unashamedly be reviewing it from the perspective of someone who already knows and loves the base game.

Enter the Gods of the Mediterranean

As its name suggests, Pantheon introduces the gods of five ancient Mediterranean cultures to the game. The favour of these gods can be bought to aid in the construction of your city, as you use their powers to complete powerful actions. The gods of each culture also have a specific in-game focus that will lead you in different strategic directions. The gods in question are:

Each god is represented by a card with a colour scheme that denotes its pantheon (Greek = blue; Roman = red; Egyptian = grey; Mesopotamian = green; Phoenician = yellow). In age one, players draw these gods close to their cities by obtaining mythology tokens, which represent the five colours of the pantheons and are achieved by unlocking certain face-down cards. In ages two and three, players can acquire and activate the deities that have been drawn close by paying money. Offering tokens are also available in age two, which make it cheaper to invoke a deity.

Depending on where the deity is placed on the board, the cost will differ for each player. The abilities tend to be powerful, one time effects, similar in power level to the effects of the wonders. Activating a deity is the fourth action available to players on their turn, alongside acquiring a card, building a wonder, or discarding a card. Unlike the other actions, it doesn't require you to remove a card from the tabletop structure, so it adds an interesting strategic dimension to the game.

Pantheon also has a few more additions that shake up the base game. These don't change the gameplay to the extent that the gods do, but they help to tie the base game and the new mechanics together and smooth out the overall experience.

The Gate card actually functions similarly to the gods. It's acquired in the same way, but it's more expensive and it gives you access to a wider range of divine powers. It makes for some interesting twists to the course of the game and has the power to really shake things up if it's used well.

Pantheon also introduces three new science tokens that get mixed in with the originals at the start of the game and used in the same way:

Of these tokens, only one refers to the new mechanics. The other two simply add more content and don't require the rest of the expansion to work. I like this aspect of them, as they add more nuance to the game and show that the designers weren't purely focused on the shiny new mechanics.

The two new wonder cards, the Sanctuary and the Divine Theatre, both tie into the new mechanics. Their effects make it easier to acquire and use god cards. From the games I've played so far I would say that they feel balanced, and certainly feed into a new, god-focused strategy.

The only new structure cards that Pantheon introduces are the five Grand Temple cards, which replace Guilds in Age Three. Like Guilds, three Grand Temples from the five are chosen at random and are shuffled into the third deck. These cards give you more victory points the more of them you have, and can be built for free with a mythology token of a particular colour, rewarding players who collected a lot of them in Age One and giving the tokens more relevance later in the game.

Is Pantheon Worth a Go?

I unreservedly recommend Pantheon for fans of 7 Wonders Duel. The expansion preserves and builds upon everything that was so good about the base game. It's not the kind of expansion that completely changes the way the game plays. Instead, it adds in new strategic opportunities that experienced players will love, new ways for your actions to affect the other player, and some excellent thematic content delivered through outstanding art and mechanics that fans of ancient civilisations can't help but adore.

It must be said that the expansion kicks the complexity up a notch. If you've only just got the base game you should definitely get to grips with it first, before adding Pantheon in. To be able to play well with Pantheon's additions you need a good grasp of the core game and how to play it. In the same vein, I wouldn't recommend teaching the expansion to another player that's new to the whole game.

Once you have a knowledge of how the base game plays, however, Pantheon is very easy to pick up. Sure, there are a few symbols that aren't particularly clear at first, but after one game with the rule book open on the table I felt like I grasped everything I needed to know.

The rule book itself is concise and helpful - more so than the base game's - and a quick read-through was all I needed before I grasped enough of the game to teach it to my wife and start playing. We had to clarify a couple of things as we went on, but it never felt onerous to do so. Additionally, the new content doesn't dramatically increase the playtime. It adds maybe five or 10 minutes, especially as you're learning it, but the game feels as well-paced as it did before.

The bottom line is that Pantheon gives you a lot of well-designed, thematic content for a very low price. It'll breathe new life into Duel for players who have played the base game one too many times, and it will make the whole package more attractive for players who enjoy strategic head-to-head games. If you love 7 Wonders Duel and haven't played Pantheon, get your hands on it as soon as possible.

You can also check out 7 Wonders Duel: Agora Expansion once you have the hang of Pantheon. If you're new to the game, you can find our review of the base game, 7 Wonders: Duel, here.

Editors note: This blog was originally published on April 12th, 2018. Updated on January 5th, 2022 to improve the information available.