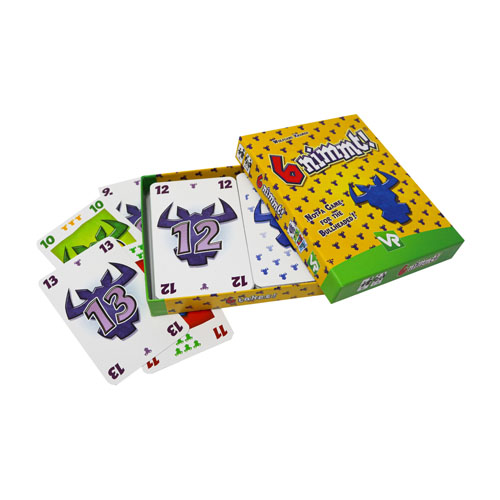 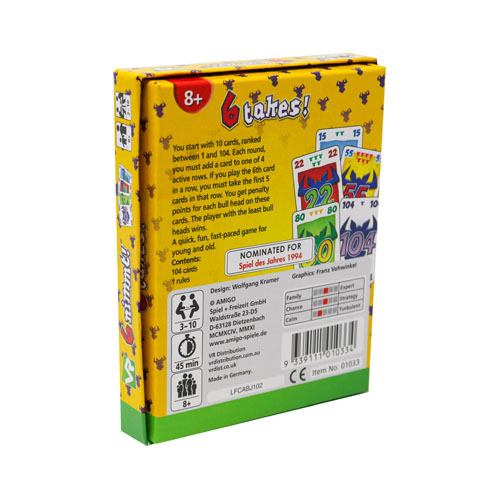 RRP: £11.99
NOW £7.99
RRP £11.99
Earn 799 Victory Points
Success! We will let you know when this product is available again.
Your email address has been unsubscribed!
Your email address has been unsubscribed!
Notify me when this product is available to purchase!
This email address is already subscribed to this product!
Not a Game for the Bullheaded! In 6 nimmt!, you want to score as few points as possible. To play the game, you shuffle the 104 number cards, lay out four cards face-up to start the four rows, then deal ten cards to each player. Each turn, players simultaneously choose and reveal a card from their hand, then add the cards to the rows, with cards being placed in ascending order based …
Read More
Category Board Games Tags Best Sellers, Golden Pear, Mayfair Games, Wolfgang Kramer SKU ZBG-MFG5714 Availability Out of stock
Share
Share this
65%

Not a Game for the Bullheaded!

In 6 nimmt!, you want to score as few points as possible.

To play the game, you shuffle the 104 number cards, lay out four cards face-up to start the four rows, then deal ten cards to each player. Each turn, players simultaneously choose and reveal a card from their hand, then add the cards to the rows, with cards being placed in ascending order based on their number; specifically, each card is placed in the row that ends with the highest number that's below the card's number. When the sixth card is placed in a row, the owner of that card claims the other five cards and the sixth card becomes the first card in a new row.

In addition to a number from 1 to 104, each card has a point value. After finishing ten rounds, players tally their score and see whether the game ends. (Category 5 ends when a player has a score greater than 74, for example, while 6 nimmt! ends when someone tops 66.) When this happens, the player with the fewest points wins!

A quick, fun, fast-paced card game for both young and old.

6 Nimmt by Amigo Spiel is a “thinking” card game for 2 to 10 players. It typically takes about 45 minutes to complete. It is a family game for all ages from 7 years and older. Although 6 Nimmt has been around for over 25 years this review will allow you to decide for yourself whether it should be venerated or just left on a shelf.

6 Nimmt is a relatively simple game consisting of a set of cards numbered 1 to 104. The aim is to avoid collecting any cards but every card you take gives you points. The size of the penalty varies and is indicated by bull heads on the cards. Most cards only carry one penalty point but card numbers that end in a five (such as 5, 15, 25 etc) have two bull heads. Multiples of ten carry three bull heads and multiples of 11 have five. Card 55 is a multiple of 11, and ends in a five so would score seven! During each round players acquire cards and the total penalties accrued are added to a player’s total.

At the start of the game each player is dealt ten cards. Four additional cards are laid face up in the middle of the table. These cards will become the starting cards for the game. Each of these four cards forms the start of a row. Each row can hold up to five cards including the start card. Simultaneously, every player chooses one card to play and these cards are then revealed. Beginning with the player who had selected the card with the lowest value, cards are added to the rows. Card placement must adhere to the following rules:

Any cards taken from the table form a player’s “bull pile” and the points totalled at the end. Play continues until all ten cards in the hand have been played. The total penalties are added to a player’s tally. The game continues until one player has reached 66 bull heads, or after a set number of rounds.

6 Nimmt has a couple of advanced play variations. These limit the number of cards so that every card value in play will be known. With two players this means using cards numbered one to 24. Each player has ten cards leaving four as start cards. With three players, cards one to 34 are used and with four gamers, numbers one to 44 etc.

One option is to shuffle the cards and deal them randomly to the players. Another option at the start of each game is to lay the cards face up and allow each player to select ten cards of their choosing. This will mean that all of the player’s cards will be known. Knowing the other cards does not make the game any easier or harder. The challenge of 6 Nimmt is to try to predict what cards the other players might select and refine one’s own choice accordingly.

6 Nimmt is a small, compact card game. The 104 cards are the size and feel of a standard pack of playing cards. The reverse design is a simple silhouette of a bull head. The rules are easy to read and very clear to understand. Each of the rules are explained with examples of play for clarity.

The ultimate aim of 6 Nimmt is to avoid being the one who plays the sixth card in a row. There are a number of strategies but ultimately you are trying to predict what cards your opponent might be playing. One wants to play cards that are guaranteed not to be the sixth card in arrow. If you are unable to avoid playing the sixth card it might be prudent to play a card that is too low for any row. One can then select which row (often the one with the fewest penalties) you replace. Others players might also face the same dilemma. Indeed if their card is lower than yours then they will play first, replace a row, collect penalty “bull points” and then allow you to play next.

It is quite unusual for rows to remain with just a single card for a whole game. Within a few rounds the row will start to grow and therefore the penalty points within them will increase. This means that if you have an extremely low card (for example below five) it might be sensible to play that first.

This game is all about playing the odds. Subconsciously, in selecting a card, you are asking “what is the chance that my card will form the next card in a row and not the sixth card?” Using all 104 cards means that for many standard games with four to six players there are at least 40 cards that are not in play. This will increase the element of luck. Playing with fewer than four players and using a full deck means that chance has an even greater influence on the game. For this reason with fewer players (two to four) I would suggest using one of the advanced play options.

With fewer cards in play the ability to estimate what cards the other players have becomes easier. This then means that one can use blocking tactics to try to force other players to play the sixth card. For example, rows may be blocked by holding onto all of the high-value cards that can be legally played. This will limit the choices that other players might have. However, this tactic will backfire if one of the players selected a very low value card and chooses to wipe that row. This could then mean your highest number cards might have to become the sixth cards.

Playing 6 Nimmt with high player counts can feel much more chance driven. The penalty points you collect will almost entirely dependent on the cards selected by the other players. Here 6 Nimmt is then a game of chance.

6 Nimmt is the complete opposite of a similarly sized card game, Pit (reviewed in October 2019). It plays well for four to six players and it does require some thought and consideration. It can even be played in complete silence. The best strategy is to try to predict other player’s card choices. The game does remind me of The Mind where it helps to be on the same “wavelength” as others.

As a compact card game it is very portable and can be played almost anywhere. Initial games do feel too chance-orientated. However, it has an appeal that can grow over time as successive games will become more rewarding. For a relatively quick, family card game, 6 Nimmt is reasonable. It has much more depth than Uno, yet is just as easy to learn to play. The enjoyment and challenge of 6 Nimmt is definitely multiplied if played together with like-minded gamers.